Despite their botanical name, Prunus persica, historians believe peaches originated in China before becoming widely cultivated in ancient Persia. Part of the rose family, peaches have corrugated seed shells placing the fruit in the same subgenus as almonds.

Although Georgia is known as the “Peach State,” California tops the nation in production, followed by South Carolina, then Georgia, and New Jersey. 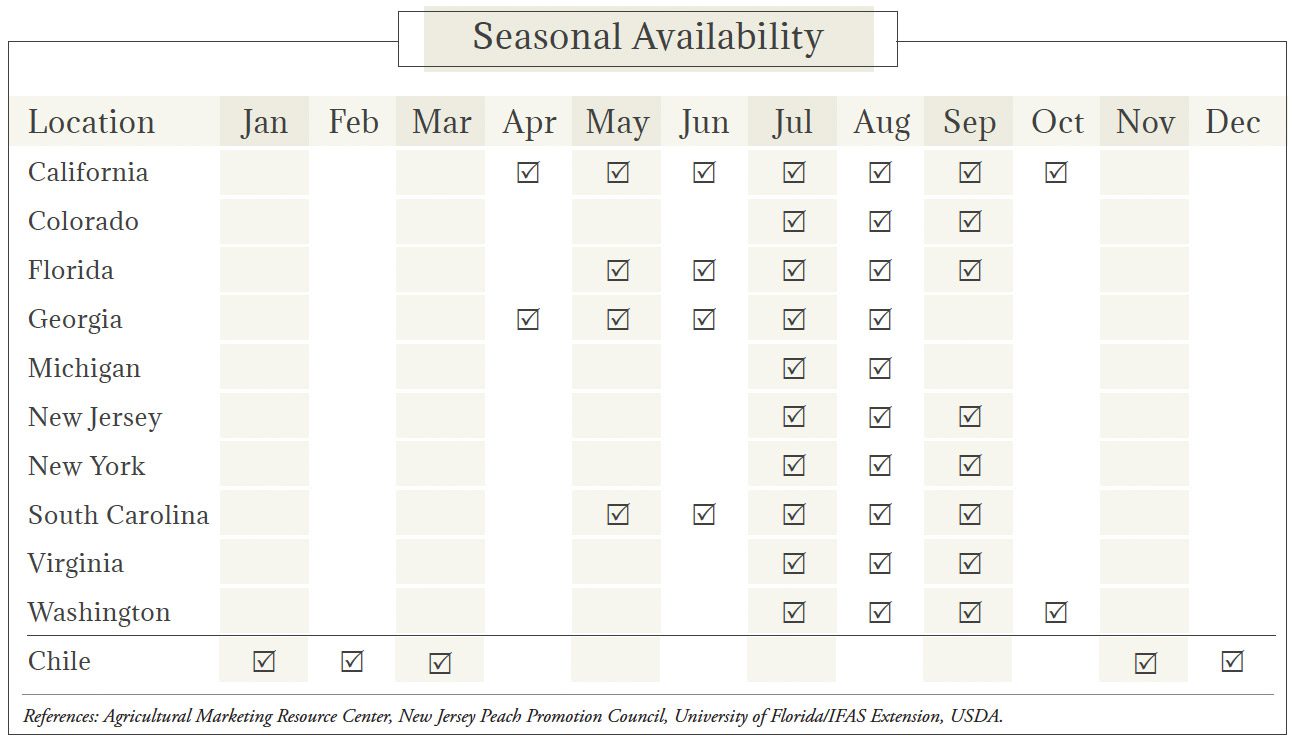 Types & Varieties
Velvety skin differentiates peaches from nectarines, which are the same species, but bear a recessive gene that prevents the growth of ‘peach fuzz’. There are hundreds of U.S. peach cultivars and over 2,000 worldwide. Fruit is classified as clingstone, freestone, or semi-freestone for how easily the pit separates from the flesh.

There are also melting and nonmelting flesh types: melting flesh can be clingstone or freestone and is favored for the fresh market; nonmelting types are better for processing or canning.

Flesh can be yellow (most common in the United States for both clingstone and freestone varieties, usually with a higher acid content), white (gaining in popularity, originally cultivated in Asia, and generally sweeter), and the rare red (lesser known and with limited availability).

Clingstone peaches are juicy, soft, and sweet, while freestone peaches have a firmer texture, are often larger in size, less juicy, and have lower sugar content.

Specialty cultivars include donut/doughnut or flat peaches, with white-flesh, a distinctive sweetness, and lower acidity than other varieties. Dwarf or smaller cultivars will bear fruit in less time than traditional trees.

Peach trees grow best in temperate climates with well-drained soil and sloped land for good air circulation. Fields previously planted with soybeans or alfalfa are not recommended due to viruses. New trees will not bear fruit for 3 years, but most enjoy an average lifespan of 15 to 20 years.

Trees require ample chill hours (from 800 to 1,500) before the blossoming can begin. Varieties are classified as early, mid, or late depending on the number of days from bloom to harvest; clingstones tend to begin earlier than freestone cultivars.

Storage & Packaging
Peaches do not ripen on their own after harvest and should be picked when ripe (though fruit intended for processing can be less mature). Color (no green left on the skin) and firmness (a slight give to the touch) are external indicators of ripeness.

Peaches can be stored for 2 to 4 weeks at 31 to 32°F with 90 to 95% relative humidity. Exposure to lower temperatures can cause chilling injury; symptoms include a water-soaked appearance, internal browning, mealy flesh, and flavor loss.