Nectarines are the same species as peaches and bear the same botanical name, Prunus persica. Smooth skin differentiates nectarines from their fuzzy fraternal twin, a result of breeding that inhibits the recessive ‘fuzz’ gene.

Nectarines also tend to be a smaller, firmer version of their sibling fruit, with a more distinct aroma, and often have a brighter red tint to the skin.

Nectarines were domesticated at least 2,000 years ago in China; the fruit’s name means ‘sweet as nectar.’ Both nectarines and peaches are members of the rose family, with a corrugated seed shell in the same subgenus as almonds. Like peaches, nectarine flesh can be yellow, white, or red. 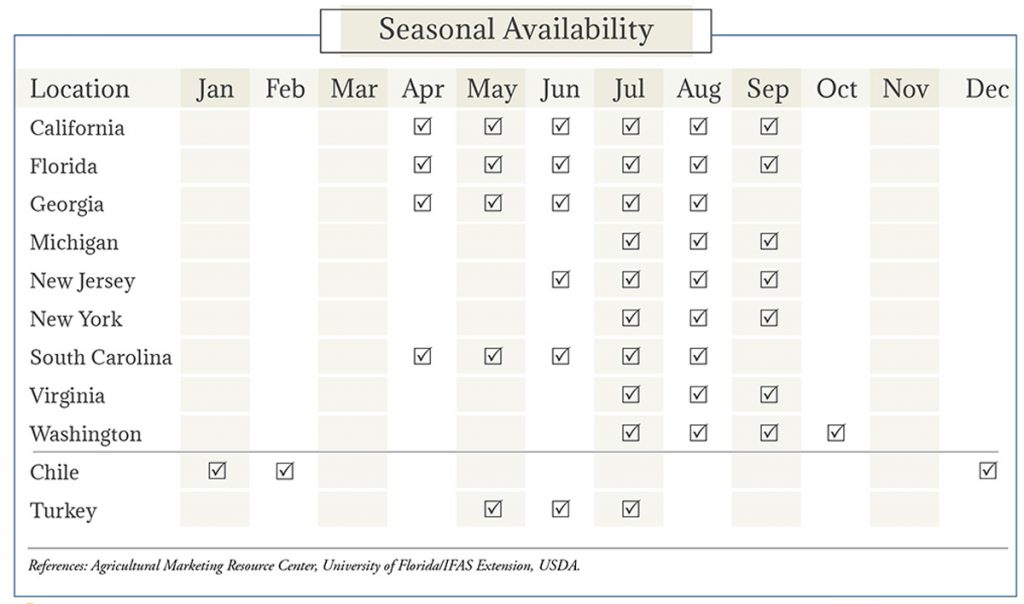 Types & Varieties
There are thousands of peach and nectarine cultivars, with hundreds currently in use for production.

Like other stone fruit, nectarines can be clingstone, freestone, or semi-freestone according to how easily the pit or seed separates from the flesh.

Fruit with a ‘clinging stone’ is generally an early variety, while freestones mature later in the season. Freestones tend to be more popular in the fresh market and better for freezing while clingstones are preferred for processing.

Yellow is the most common flesh color in the United States for both clingstone and freestone varieties, usually with a higher acid content.

White flesh, which originated in Asia and continues to grow in popularity for both peaches and nectarines, tends to be sweeter.

White nectarines, such as the Arctic varieties, August Pearl, Jade, Magique, Polar Light, Redgold, and Zephyr, are known for their sweetness and low acid content. Flamekist is a juicy, soft, sweet clingstone variety often used for processing; Heavenly White and Zephyr are white freestone nectarines with a firmer texture, larger size, and lower sugar content, popular for baking and freezing.

Like peaches, there are also specialty cultivars such as flat donut/doughnut varieties preferred for their sweetness, lower acidity, and delicacy. A popular example is Sauzee King.

Technically, there is no such thing as a “nectarine tree” since nectarines are peaches with a recessive gene, but trees can be bred to produce a yield that is primarily nectarines.

Peaches may still be found on trees that have been cross pollinated and cultivated to produce nectarines, and vice versa. Growers usually graft nectarine-bearing branches onto peach trees to produce more nectarines.

Trees grow best in temperate climates with well-drained soil and sloped land for good air circulation. Fields previously planted with soybeans or alfalfa are not recommended due to varioussoil viruses.

New trees will not bear fruit for three years, but most enjoy an average lifespan of 15 to 20 years. Mature trees can reach heights and widths of 25 feet and require ample chill hours (ranging from 600 to 1,000 hours) before the onset of warm weather blossoming can begin.

Excess flowers and young fruit should be thinned out (usually done by hand to prevent mechanical injury). Varieties are classified as early, mid, or late depending on the number of days from bloom to harvest; clingstones tend to be earlier than freestones.

Like peaches, nectarines do not ripen on their own after harvest and should be picked when ripe (though fruit for processing can be less mature).

Color (from green to yellow skin) and firmness (a very slight give to the touch) are external indicators of ripeness. Most trees require multiple harvests; a gentle twist should dislodge fruit, without undue pressure as nectarines are highly susceptible to bruising.

Pests & Diseases
A number of pests are attracted to both peaches and nectarines, though the latter may be more susceptible lacking the fuzz on peaches that is supposed to protect fruit from some pests.

Both squash bugs and stink bugs are attracted to developing fruit and leave tiny bite marks on immature fruit that can turn into wrinkles as the skin matures. Most of these imperfections are harmless, but can occur frequently in organics due to restrictions on pesticide use. Research indicates yellow-flesh varieties as more resistant to some pests and disease in nectarines.

Storage & Packaging
Fruit can be stored for 2 to 4 weeks at 31 to 32°F at 90 to 95% relative humidity. Exposure to lower temperatures can cause chilling injury; symptoms include internal browning, mealy flesh, and flavor loss.

Nectarines are divided into U.S. Fancy, U.S. Extra No. 1, U.S. No. 1, and U.S. No. 2 grades. All grades stipulate fruit be of one variety, mature, and well-formed (with the exception of U.S. No. 2, which are described as ‘not badly misshapen’).

• Bruising is scored as a defect when exceeding an area greater than half an inch, or more than one-eighth of an inch in depth on a 2-inch nectarine
• There is no color requirement for U.S. No. 1 grade, but nectarines packed as U.S. Fancy shall have not less than one-third of the surface showing the red coloring characteristic of the variety
• Shriveling is scored as a defect when occurring on the shoulders of fruit, or if it affects more than 3% of the surface.