Napa cabbage, also known as Chinese cabbage, has been cultivated in China for at least 1,000 years, spreading to other parts of Asia, notably Japan. It is a relative newcomer to the United States, thought to have been brought by Chinese and Japanese immigrants at the turn of the 19th century.

Although similar to head cabbage, Napa cabbage is generally taller, denser, and more barrel-shaped, growing straight up rather than rounded. This is not true of all varieties, however, as some Napa cabbage cultivars exhibit differing shapes and sizes. Interestingly, Napa cabbage is a bit of a misnomer as the leafy green is more similar to turnips than cabbage.

Napa cabbage has a mild taste profile that has been compared to celery. It can be consumed raw, steamed, processed, or fermented (like kimchi) and is often served in stir fry dishes and soups.

Types & Varieties
There are two primary types of Chinese cabbage, the Pekinensis group (referred to as Napa cabbage) or the Chinensis group.

Celery mustard, pe-tsai, pak choi, congee, and white celery mustard belong to the Chinensis group. Depending on who you ask, there’s a third group, classified as Michihili.

Jade Pagoda is a variety of the Michihili family. In addition, there are a great variety of cultivars that have not yet emerged on the American market but are commonplace in Asia. 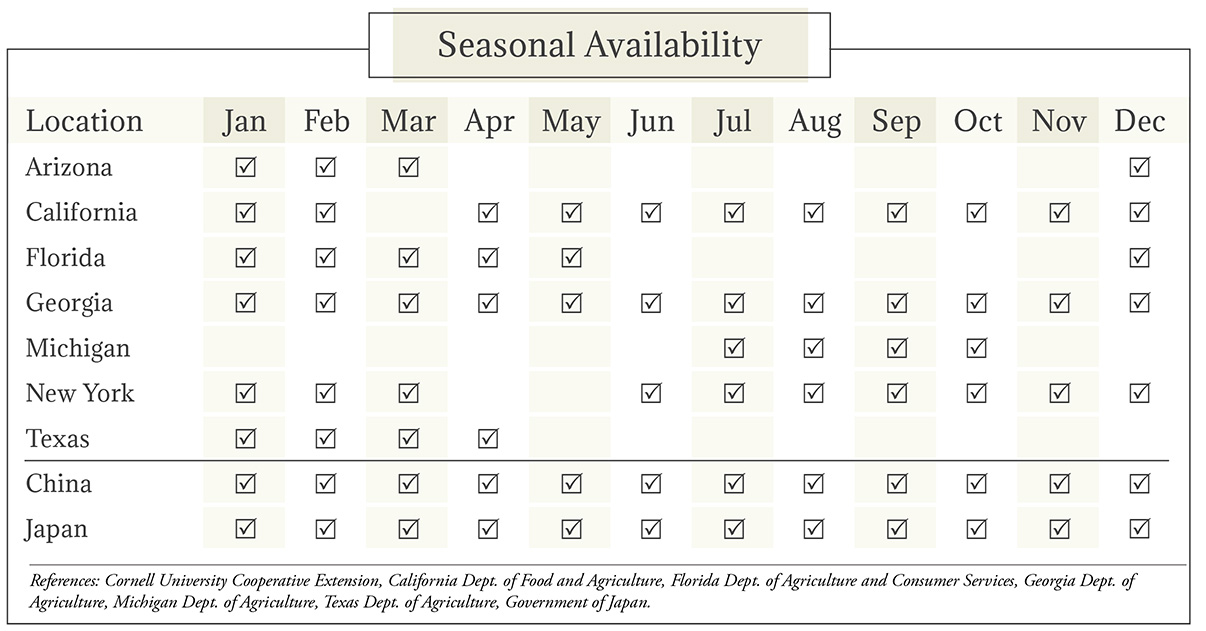 CULTIVATION
Like round cabbage, Napa cabbage is primarily a cool season annual crop, thriving at temperatures between 60 and 65°F. The seeds are typically planted in the fall, spring, or late summer in loamy soil with a pH range of 5.5 to 7.0. Ample sunlight and drainage are important for optimal growth as well.

The distance between rows is determined by the type; more upright varieties can be planted closer together than rounder, looser ones. Care is similar to that of round cabbage.

Napa cabbage is prone to bolting in too warm or too cool of temperatures, which greatly reduces quality. Mulching can help preserve water and suppress weeds, while row covers can be used for pest control and in advance of freezing temperatures.

After about 70 to 80 days, Napa cabbage should be ready for harvest, although some varieties mature more quickly. When heads are firm, dense, and of a usable size, harvest begins.

If the head feels loose, there may be too few inner leaves and it should be left to grow. Unlike round cabbage, Napa cabbage may be unable to stand upright once mature. If not harvested quickly, plants may bolt. Like other cabbages and cauliflower, Napa cabbage is typically trimmed, washed, and packed in the field.

Storage & Packaging
Cabbage is usually cooled and stored at 32°F from 3 weeks to 6 months, depending on cultivar. Napa cabbage is slightly hardier and generally lasts from 2 to 6 months.

To prevent freezing injury, Chinese cabbage should be kept no cooler than 31°F with 90 to 95% relative humidity. Cabbage and Napa cabbage are sensitive to ethylene and should be stored in a well-ventilated area.

GRADES & GOOD ARRIVAL
There are no U.S. grade standards specific to Napa cabbage at this time, and no published good arrival guidelines for this commodity.