A member of the onion family, leeks (Allium porrum) are native to Asia and the Middle East, where they have been eaten since ancient times and are even mentioned in the Bible. Leeks are very popular in Europe, where they are revered in Wales as a national symbol of religious freedom.

The word ‘leek’ purportedly means only ‘plant,’ lending itself to several names like sibling garlic, once pronounced ‘gar-leek.’ Elephant garlic is actually a type of bulbing leek with cloves, and not garlic at all.

Leeks look like oversized, very thick green onions with bluish-green broad leaves and a thick white compacted sheaf (often incorrectly called a stem or stalk) that can grow up to 10 inches long.

Considered “the gourmet’s onion,” leeks have a subtle ?avor and are milder and sweeter than other onions and garlic.

The white lower part of the plant, the actual leek, can be consumed raw or cooked, but the green leaves should be discarded.

Leeks are steamed, boiled, braised, or fried and eaten whole. They are also frequently chopped or crushed and added to soups, sauces, casseroles, and other dishes.

The unique green vegetable is an essential ingredient in vichyssoise, a classic thick soup made from pureed leeks, potatoes, chicken stock, and cream, traditionally served cold. 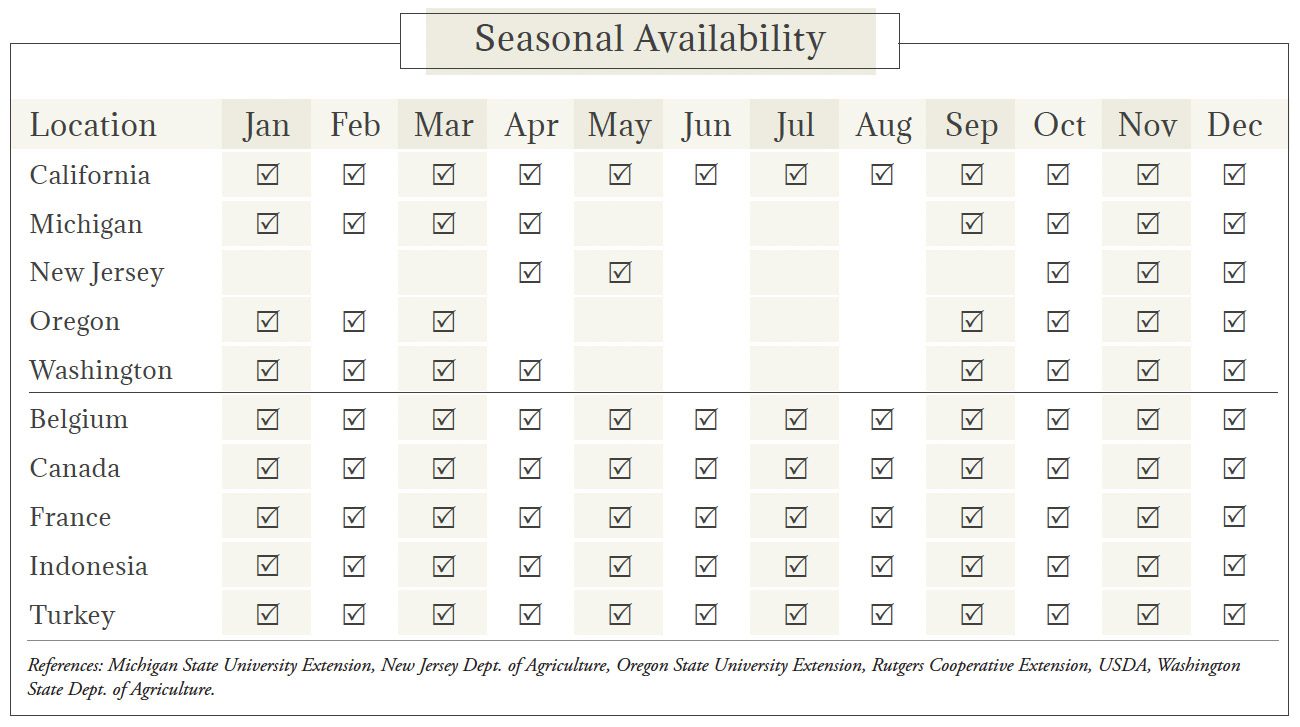 Leeks are a labor intensive crop because they are typically transplanted, harvested, cleaned, and packed by hand. A cool-weather crop, leeks thrive in temperatures below 75°F in full sun and well-drained slightly acidic soil. If temperatures fall precipitously, plants may bolt. It can take 70 to 150 days for leeks to grow to full maturity, depending on variety.

Although it varies by region, leeks are generally planted in late summer or early fall for winter harvesting. Transplanted leeks should be grown in a greenhouse or indoors for 6 to 8 weeks before outdoor planting.

To encourage growth of a longer edible sheaf, leeks should be planted deeper (up to 12 inches) into the soil. Plants require regular watering, but overwatering should be avoided to prevent fungal development.

Leeks are ready for harvest when the sheaf is 1 to 2 inches in diameter. Although some growers start the harvesting process with machines, most leeks are pulled by hand due to their root systems.

Pests & Diseases
Allium or onion leafminers can quickly infest plants, causing leaves to become curled and deformed. Adults are small black or gray flies with a characteristic orange spot and lay eggs at the base of plants.

Once hatched, the small larvae pierce leaves and create channels through the leek, which can allow bacteria and pathogens to enter the plants.

Onion thrips are small insects varying in color from yellow to black. The adults lay eggs on leeks and other onion plants. Once hatched, larvae feed on leaves then move into soil to pupate. Infestations can result in stunted growth, twisted leaves, smaller bulbs, reduced yields, and plant death.

Onion maggots are a major threat to leeks, shallots, onions, garlic, and chives. The pests burrow underground to feed on bulbs, dig tunnels, destroy tissue, and leave plants vulnerable to a host of diseases.

White rot can live in soil for years and infect plants. Leaves turn yellow, wither, and overall growth is stunted. In some cases, a fuzzy coating forms on the bulb and sheaf, making the leeks unmarketable.

Downy mildew typically forms on plants due to overly wet and cool temperatures, leading to the formation of long, light-colored blotches and velvety purple spores on leaves. It also causes the sheaf to soften and may lead to premature sprouting of leaves.

Basal rot is a common disease of leeks, onions, and garlic, particularly in transplants. The soilborne fungus causes leaves to turn yellow and die. Roots will turn dark brown or pink, and a white fungus may appear on the bulb.

Storage & Packaging
Once harvested, leeks should be washed and stored in a moist, cool environment with temperatures between 32 and 40°F. Wilting will occur if proper moisture levels (95 to 100% relative humidity) are no maintained. Leeks are sensitive to ethylene exposure.

Leeks are typically bunched and packed upright in boxes or containers. When trimmed and packed in sealed polyethylene bags and stored in ice, they can last for up to 10 weeks. When stored in a controlled atmosphere at 32°F, leeks may last up to several months.

There is no U.S. grade information specific to leeks at this time.