A member of the Vitaceae family, grapes can be classified into an estimated 11 distinct genera and 600 different species. In addition to this vast diversity, grapes are one of the oldest cultivated plants dating back as far as 6,500 B.C.

Spanish colonizers are credited with bringing grapes to the Americas, but multiple native species (including V. labrusca, V. aestivalis, V. riparia, and V. berlandieri) are notable for their stronger, muskier aroma.

The popular contemporary cultivar, Concord, is a descendant of V. labrusca. The oldest grapevine in America is a 400-year-old Muscadine vine located in North Carolina.

Highly versatile, grapes are consumed as fresh, dried (as raisins), or processed into jam, juices, or wine. They can vary vastly in flavor as well as color—from black, blue, blue-black, and purple to red, green, and golden.

California dominates U.S. production of table grapes and exports to Mexico (and throughout the world); in turn, Mexico augments U.S. supply with imports from May through October. Chile and Peru contribute to U.S. supply as well, shipping from October through May. 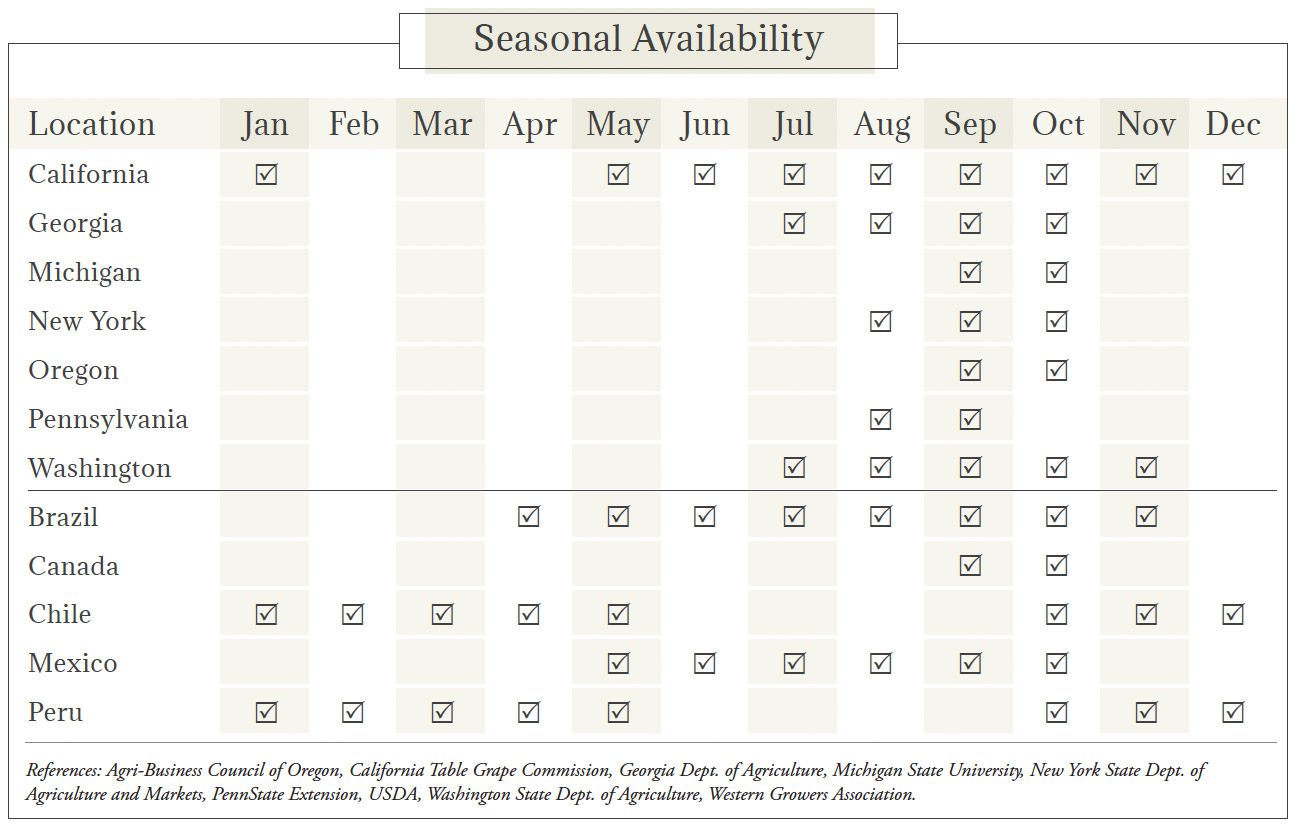 Growers in California have been successfully cultivating grapes for two centuries, with up to 85 current varieties. Table grapes are available from May through January, supplying 99% of the nation’s production.

American grapes can tolerate varied climates, hence being a popular crop for growers in the United States and in some provinces in Canada. Cultivars able to tolerate cooler climates include Buffalo, Concord, Catawba, Edelweiss, Emerald, Golden Muscat, Niagara, and Steuben.

Any variety of sweet grapes can be made into grape juice although the most common is Concord. Muscadine grapes, which grow wild in North Carolina and much of the Southeast, are considered native to the Americas.

Some varieties are not recommended for certain regions. For instance, grape varieties such as Jupiter, Saturn, and Sunbelt can be susceptible to Pierce’s disease (see below for further information) and should not be grown in areas where the disease has been a significant threat.

Grapes require deep, fertile, well-drained soil, and ample sunlight. Vines can last 15 to 30 years depending on location and care.

When planting, supported (trellised) vine rows should be 6 to 8 feet apart to allow for sufficient canopy growth with at least 8 to 10 feet in between. Closer rows may restrict air flow (which can cause ‘frost pockets’ and vine injury), create too much shade, and force vines to compete for sunlight and water.

Vines require pruning to produce large clusters but climate, variety, irrigation, and weed control also factor into the equation. Planting into black plastic mulch can help with weeds and better maintain soil temperature. Improper plant management will impact fruit quality and the life of the vine.

Sufficient irrigation (one inch per acre per week) and weed control are critical. Areas with above average rainfall and humidity may need fungicide applications to prevent disease. Netting and noise makers will help keep wildlife, especially birds, away from fruit near harvest.

Birds will feed as acid falls and sugar content rises, so control measures should be in place before brix levels accelerate. Harvesting is labor intensive and requires careful planning by variety and, of course, intended use.

A hand refractometer is used to determine sugar levels prior to harvest (usually 15 to 16% for table grapes, 17 to 21% for wine grapes). Bunches are ready when grapes at the tip of clusters (the last to mature) are sweet. Grapes will not ripen after harvest.

Pests & Disease
Phylloxera is an insect that kills grapevine roots by laying eggs on rootlets (Muscadines are resistant/tolerant). Grape berry moth larvae feed on blossoms and berries, though insecticides should not be applied until after the grapes have reached the size of small peas or beneficial pollinators will be destroyed.

Once the larvae proceed to the second stage (moth) they are increasingly difficult to control. To prevent hibernation of moth pupae, leaf litter should be cleaned up before winter.

Grape leafhoppers feed on the underside of leaves resulting in stippling. Because they are so small, these insects can do serious damage before their presence is known.

Pierce’s disease is spread through infected insects as they feed on vines. Some varieties are tolerant of the disease (for instance, Muscadine) but susceptible varieties will experience vine death as there is no treatment.

Powdery mildew causes lesions on vines, leaves, and fruit with a characteristic powdery white or grey coating. Fungicides, both commercial and organic, have been successful in preventing and controlling the disease, which can spread quickly by high humidity and a lack of sunlight.

Downy mildew can infect leaves, shoots, and berries, beginning with lesions on upper surfaces and a white cottony growth underneath (powdery mildew can occur on both sides). If left untreated, defoliation and vine vigor can be affected along with ripening and berry yields.

Black rot is spread by dried berries left on the vine or on the ground over winter. Tan spots with tiny black specks appear one to two weeks after infection. Removing dried berries from vines before winter is key to prevention.

Anthracnose causes round holes in leaves and can be controlled by the same fungicides as black rot. There are several other types of rot, including bitter, fruit, ripe and sour rot.