Eggplant is thought to have been cultivated in India and China more than 1,500 years ago. A Chinese cookbook from the fifth century mentions eggplant, and ancient Chinese brides were required to have eggplant recipes as part of their dowry.

Colonialization and trade brought the fruit (though most commonly regarded as a vegetable) to Africa, Europe, and eventually to America in the 1800s.

Part of the nightshade (Solanaceae) family, eggplant was once thought to be poisonous. When eggplant arrived in Italy, it was called the “mad apple” and reputed to make people who ate it go crazy. The leaves and flowers, when consumed in large quantities, can be poisonous, but not the fruit.

Eggplant is related to tomatoes, potatoes, and peppers, and goes by many names including eggfruit, aubergine, brinjal, tomato-fruited eggplant, gilos, guinea squash, mad apple, and nasubi. 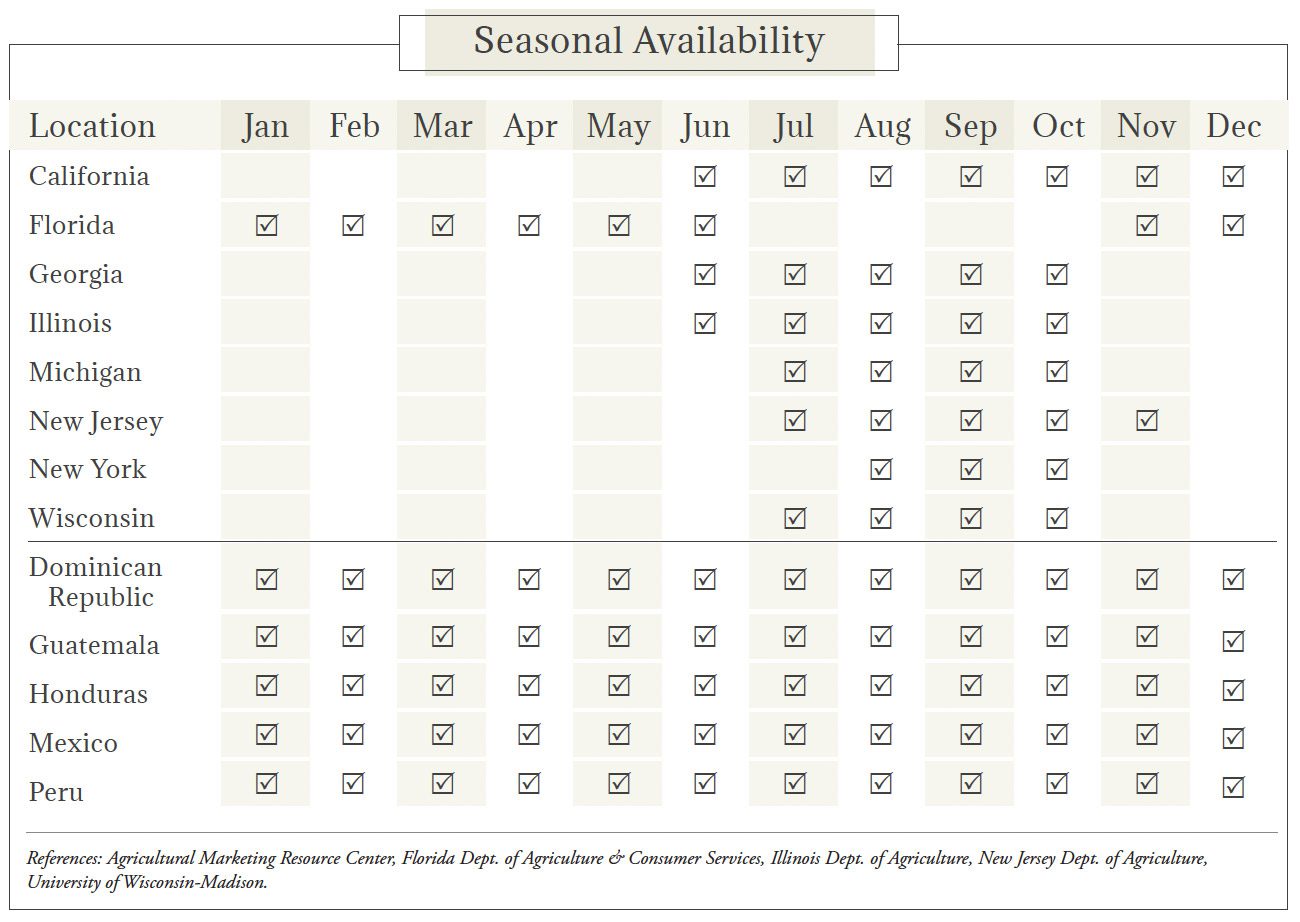 Types & Varieties
Eggplant comes in two basic families: Solanum melongena, the traditional eggplant with a solid, fleshy inside, and Solanum integrifolium and Solanum gilo which are more like tomatoes with a soft inside and hence called “tomato-fruit eggplant.”

Common eggplant is dark purple or black, 6 to 9 inches long, bulb-shaped, and 3 to 4 inches wide at the base. Varieties include Black Bell, Black Beauty, and Black Magic. Other large-fruit varieties include Dusky, Epic, Classic, Burpee Hybrid, and Ghostbuster.

Eggplant also comes in elongated varieties such as the Ichiban, Slim Jim, and Little Fingers. There are several popular Asian cultivars including Orient Express, Orient Charm, Calliope, and Machiaw, as well as ornamental varieties including the Easter Egg.

Asian varieties have softer skin and ornamental varieties are small, oval-shaped, and often whitish in color. Tomato-fruit eggplant can range in color from green to red to orange, and even be striped or bicolored.

As a crop, eggplant loves heat and full sunlight but does not like frost. It grows best in rich sandy or loamy well-drained soils with a pH between 5.5 and 7. Plants require several months of sun to bear fruit, so seedlings should be planted well before the last frost is expected.

Star-shaped flowers will grow on thick stems and self-pollinate, producing various sizes of purple, black, and sometimes white or striped fruit, depending on the variety.

Mature plants can reach 8 feet in height. Fruit can be harvested when skin is firm and shiny, and is edible from about one-third of full size through maturity. Too-mature fruit can become hard and bitter.

To produce larger eggplant, remove other fruit to allow the plant to send nutrients to just one or two. Harvesting by hand with clippers is best; typically the cap and a short piece of stem are left on.

Pests & Diseases
Eggplant is susceptible to several pests and diseases including flea beetles, aphids, and spider mites that damage leaves in young plants and can impact yield. Pests can be managed with insecticide and row covers.

Diseases include verticillium wilt which causes yellowing and wilting and can stunt or kill plants, as well as postharvest diseases such as black or grey mold rot and hairy rot that can damage fruit.

Eggplant should be cooled quickly after harvest (forced air or hydrocooling) to maintain moisture. Chill to 50°F and 90 to 95% relative humidity to maintain freshness for up to 2 weeks.

Cooling below 50°F for storage or transportation can result in chilling injury, leading to pitting or browning of flesh and seeds. Normal decay after 2 weeks occurs as loss of surface sheen, wrinkling, browning of the stem or top, and spongy pulp tissue.

Waxed cartons can reduce moisture loss and decay. Stacking cartons and overpacking can cause bruising and decay.

Eggplant are divided into U.S. Fancy, U.S. No. 1, and U.S. No. 2 grades: U.S. Fancy should exhibit similar varietal characteristics (except as a mixed or specialty pack; the same is true for U.S. No. 1), fruit should be well colored and shaped, firm, clean, and free from decay or worn holes and injury from scars, freezing, disease, insects, or mechanical means.

For U.S. No 1, eggplant should be fairly well colored and shaped, firm, clean, and free from the above decay and injuries; U.S. No. 2 should be firm, free from decay, and with no serious damage from freezing, disease, insects, or mechanical injury.