Cucumbers are said to have originated in India, brought to China 2,000 years ago, and then to Europe via Greece.

Today, cucumbers are principally grown for two crops: fresh (slicing) and pickles (pickling). Fresh production is led by Florida and Georgia, though the United States imports a substantial amount from Mexico, with lesser quantities from Canada, Honduras, and the Dominican Republic.

Although greenhouse cultivation of cucumbers is on the rise, only a fraction of the nation’s production comes from domestic greenhouses, though a healthy portion of imported cucumbers are grown in greenhouses. 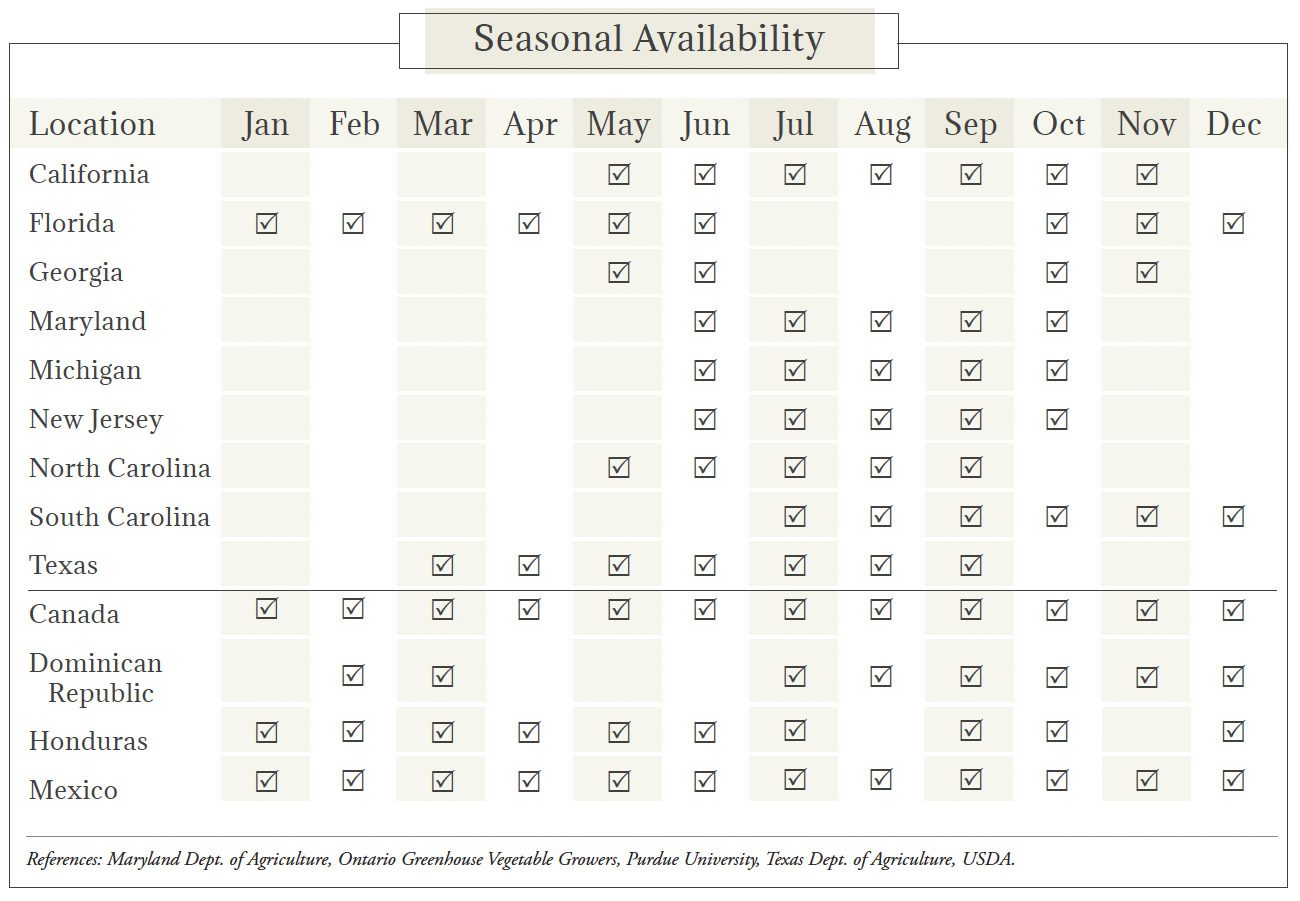 Types & Varieties
Cucumbers are part of the Cucurbitaceae family, which includes gourds, pumpkins, watermelon, and squash.

There are hundreds of varieties, but the most common are the garden cucumber and English cucumber, along with specialty varieties such as Armenian and Asian cucumbers, as well as lemon cucumbers.

Garden cucumbers are dark green, thick and juicy, and usually waxed to keep moisture in. English cucumbers are longer and thinner with a lighter flavor and usually sold wrapped in plastic to preserve freshness and reduce moisture loss.

For pickles, ‘burpless’ varieties—those with less bitterness—are recommended, though some consider this as simply a marketing term for the Oriental trellis cucumber.

Cucumbers are fairly adaptable but well-drained, loamy, fertilized soils work best. In field crops, uniform soil—with a pH of between 5.8 and 6.6 and suffcient levels of nitrogen, phosphorus, potassium, calcium, magnesium and sulfur—ensures uniform yields. Soil should be tested for nematodes before planting.

Cucumbers should be planted when soil temperature is around 60°F without falling below 50°F in the evenings as they are sensitive to chilling and frost. Optimal growing temperature is between 65° and 95°F.

Cucumbers need a steady and continuous supply of water for uniform yields. Fluctuations in watering can cause defects and deformities.

Harvesting begins when cucumbers are under 2 inches in diameter and 6 to 8 inches long, depending on variety.

Mature fruit is produced at different times on each plant, so hand-harvesting is necessary. Pickling cucumbers are typically gathered by machine.

Pests & Diseases
Cucumbers are susceptible to many pests and diseases. Cold and wet soil, residual herbicide, and fungi-caused damping-off can impact crops.

Another risk is crooking, or curvature of the cucumber, which occurs when leaves block straight growth, and in some cases, from insects feeding on one side of the young cucumbers. A one-inch curve per 12 inches in length is the crooking limit for first-grade fruit.

For U.S. Fancy, cucumbers must be well colored and formed, not overgrown, fresh, and firm; free from decay and sunscald, or injury from sunburn, scars, yellowing, dirt or other foreign material, and damage caused by freezing, mosaic or other diseases, insects, cuts, bruises, or mechanical injury.

Generally speaking, the percentage of defects shown on a timely government inspection certificate should not exceed the percentage of allowable defects, provided: (1) transportation conditions were normal; (2) the U.S. Department of Agriculture (USDA) or Canadian Food Inspection Agency (CFIA) inspection was timely; and (3) the entire lot was inspected.

• Unless otherwise specified, the maximum diameter of a cucumber must not exceed 2.375 inches
• Sunken areas are scored as a defect when more than .0375 inches in diameter
• Open spaces (hollow areas) are scored as damage when numbering 3 or more, each exceeding .5 inches, or when the tissue is discolored, moldy, or dehydrated
• Most cucumbers are waxed for better appearance, which can help prevent shriveling due to moisture loss;
excessive wax, if obviously visible, is scored as an appearance defect.