Fruit grown commercially in the United States marketed as “cantaloupe” (Cucumis melo ‘cantaloupensis’) is actually muskmelon (Cucumis melo ‘reticulatus’), though both are members of the same family. The Cucurbitaceae family also includes squash, gourds, pumpkins, watermelon, and cucumbers. Cross-pollination within the family does not result in poor melon quality, as an old wives’ tale suggests, but results in seeds to produce an entirely new fruit.

Curcurbits may have originated in southern Mexico and Central America, but cantaloupe was originally cultivated in the Near East including Turkey, China, India, Afghanistan, and Uzbekistan.

Cantaloupe was grown by Native Americans near Montreal in the 1500s and made its way to the U.S. East Coast by the mid-1700s. Commercial marketing of cantaloupe did not begin until in the 1870s.

The majority of domestic production is in California, while Mexico is a significant grower and exporter.

Types & Varieties
While there are many varieties and hybrids of cantaloupe developed for size, sweetness, and hardiness during shipping, types are generally separated into Western or Eastern Shipper.

These varieties are usually grown in western states and shipped to markets across the country, though they can be grown anywhere with appropriate conditions.

Most are harvested at half-slip, when the fruit has only partially pulled away from the stem and can continue to ripen during packing and shipping.

Cantaloupe can be directly seeded or transplanted. Either method requires wide rows and adequate spacing in between plants. Ideally, harvest should be from 2,000 to 5,000 cantaloupe per acre on bare ground and from 6,000 to 12,000 per acre on plastic mulch. Smaller varieties of less than 3 pounds each may yield as many as 20,000 per acre.

Planting should take place after frost risk with soil temperatures above 60°F. Average air temperatures should range from 65 to 95°F. Growing conditions should include full sun and well-drained, possibly sandy soil with a 5.8 to 6.6 pH.

Constant moisture is needed throughout the season; drip irrigation is best as it produces less foliage and allows honeybees unrestricted access for pollination. Mulching is ideal to keep soil moisture levels constant and minimize disease.

One honeybee colony placed either beside or within each acre is needed at early flowering, hives can be removed when fruit is set. Approximate time from pollination to harvest is 30 to 35 days.

Cantaloupe is ready to harvest when the fruit surface shows raised, well-rounded netting. Harvest-readiness is determined by maturity, not size. Fruit is hand-picked between half- and full-slip and will ripen after picking but not increase in sugar content.

Cantaloupes at full-slip have reached their maximum sugar development. External color varies at this stage and may be slightly greenish. Multiple harvests and frequent picking ensure premium quality. 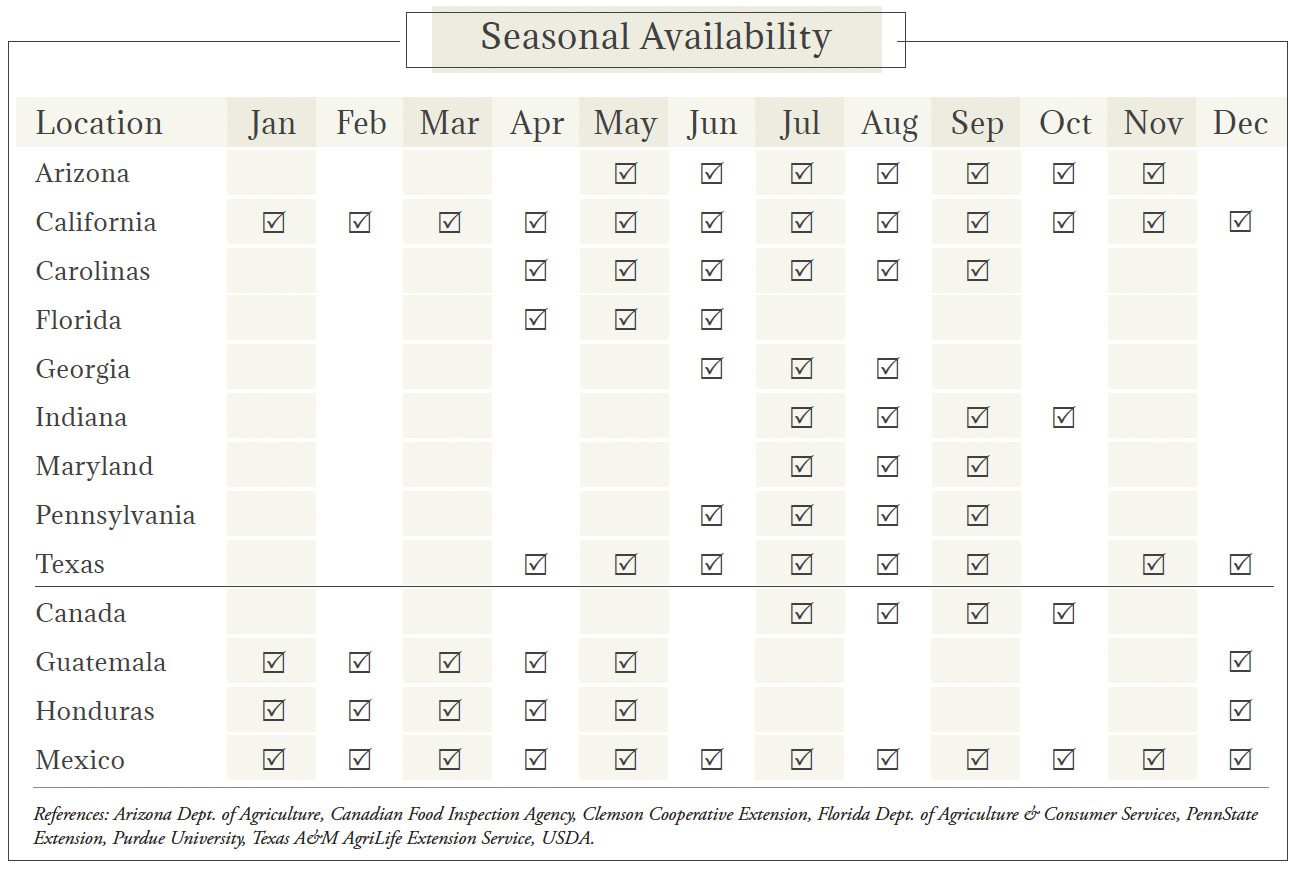 Pests & Diseases
Young cantaloupe plants are particularly vulnerable to aphids as well as striped or spotted cucumber beetles, which can carry bacterial wilt. Cucumber beetles are active in early spring above temperatures of 70°F. Later in the growing cycle, pickleworms become a problem as their larvae burrow into the developing fruit to feed. Other common pests include squash vine borers, seed corn maggots, rootknot nematodes, leafminers, and rindworms (cucumber beetle larvae).

Storage & Packaging
To avoid surface mold, cantaloupe can be treated with hot air or water immersion, then dried thoroughly. Precooling after harvest is important for postharvest quality.

Cantaloupe can be stored for up to 21 days at 36°F, but optimal quality is achieved between 36 to 41°F for about 12 to 15 days. Seven days or longer below 36°F may cause chilling injury.

Postharvest quality is maximized between 90 to 95% humidity. Higher humidity may result in stem-scar and surface mold. An oxygen level of less than 1% or carbon dioxide above 20% may impair flavor, ripening, or cause other defects.

Cantaloupe is divided into several grades: U.S. Fancy, U.S. No. 1, U.S. Commercial, and U.S. No. 2, each with specific requirements and tolerances.

• Cantaloupe has a minimum requirement for soluble solids (brix); to be considered as meeting U.S. No. 1 grade, fruit must have at least 9% soluble solids
• Liquid in the seed cavity is scored as a defect when fermented or if more than half the cavity is filled
• Surface mold is not a free-from defect; it is scored as damage due to density (thinly covered to thick) and color (white to black) if appearance is materially affected
• Two types of decay (wet and dry) affect cantaloupe; each type is a free-from defect, scored against the 2% tolerance for decay.