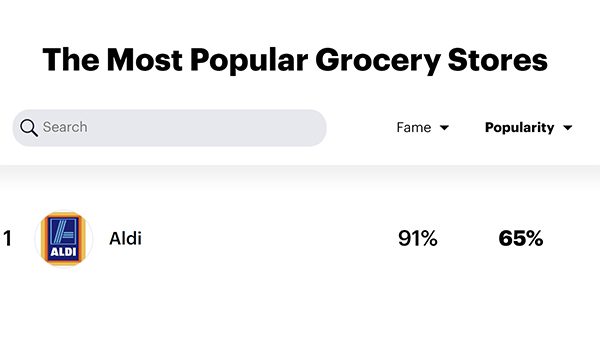 If you believe everything you read on the internet, Aldi BB #:116756 was just voted America’s “most popular” grocery store.

At least that’s what’s making the rounds in the media, thanks to a story from Real Simple. That got picked up by news aggregators, and then the trade media.

Here’s why I take this with a grain of salt — no disrespect to Aldi. I’m a big fan, and Aldi is making its quickly making its way up the list of the largest grocers in the U.S., with more than 2,200 stores in 38 states.

This list was created by an entity called YouGovAmerica, “an international research data and analytics group headquartered in London, UK.” According to their methodology page, data comes from daily or weekly tracking surveys, with a representative sample of 1,500 respondents.

That’s a pretty shallow pool of respondents when we’re trying to gauge something as diverse as grocery stores in the U.S. I often roll my eyes at lists that declare “Best” or “Favorite” or “Most” when the majority of the U.S. doesn’t have the ability to experience them. It’s a pretty safe bet most people in Texas haven’t visited a Stew Leonard’s, or even a Wegmans, and most Mainers haven’t had the pleasure of shopping at H-E-B.

I feel like lists that have a little more data behind them, like dunnhumby’s Retailer Preference Index, or even Consumer Reports’ annual rankings.

I wasn’t even going to hold it against a firm not based in the U.S. for results on “America’s Most Popular” … until I saw this:

I did a double take. Fresh & Easy, also known as Fresh & Easy Neighborhood Market, Tesco’s monumental West Coast flop is on here? UK-based Tesco sank billions into opening more than 200 stores in California and Arizona starting in 2007 before pulling up stakes and abandoning the project in 2015. The company was widely criticized for the blunder.

How did Fresh & Easy even get here? Immediately no. This list is bonkers, and is hereby dismissed.

Sorry, Aldi. I believe you’re one of America’s favorites, but this list? Eeeehhh…try again.