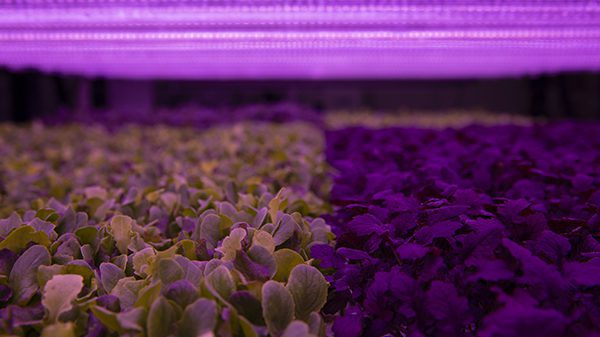 The Big Idea: Vertical Growing
How it changed the game: For decades, greenhouses brought us cucumbers, bell peppers, and tomatoes in areas and climates where it wasn’t possible before. This, too, was a gamechanger for the fresh produce industry.

Now the change in this category is taking a new direction, from premium fruits like berries and melons, to greens grown under completely artificial light sources.

UP Vertical Farms, a partnership with Vancouver, British Columbia-based Oppy (the Oppenheimer Group BB #:116424, headquartered in Vancouver, BC), is one example gearing up for commercial release this winter.

According to Bahram Rashti, he and his brother Shahram, have been perfecting the concept for the past seven years.

“Our greenhouse is super large, and blacked out, which is symbolic because in a greenhouse the whole reason they exist is to bring in sunlight,” Rashti explains. “We’ve blacked it out because we don’t need it. We control all the photons they can handle.”

The tipping point
A hands-free system also produces lettuces that have a longer shelf life—three to four weeks—grown regionally with fewer miles from farm to destination.

“We’re going to build it up close to everywhere Oppenheimer has an actual distribution network, facilities throughout Canada and the United States,” Rashti says.

From these distribution points, UP Vertical Farms is cutting thousands of miles out of the equation, with existing distribution routes provided by Oppy.

The company has set a goal of becoming the world’s largest and most sustainable vertical farm by 2024, by creating a blueprint for its technology and process that can be easily scaled up and built out.

The grower is able to do this, because, Rashti shares, “We designed it all in-house, with our own engineers. It took a long time, but we can provide an affordable product that’s profitable.”