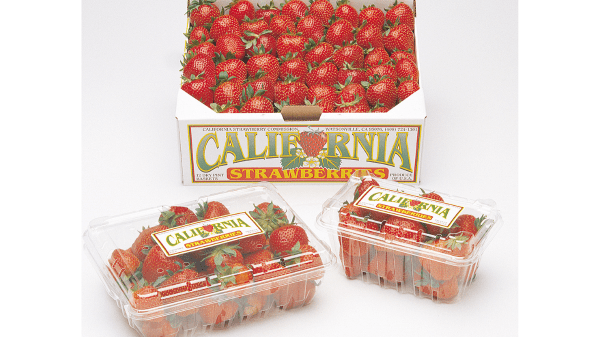 The Big Idea: Strawberry Clamshells
How it changed the game: Picture the so-called “berry patch” at your favorite retailer. It’s likely a cooler case of neat and tidy rows of shiny clear plastic clamshells.

Compare that to the idealistic farmers market-style merchandising harkening to berry displays of the past, with green fiber or plastic baskets and lightweight punnets stacked high with fresh, ripe berries.

Initial hurdles
Cindy Jewell, founder of Jewell Marketing in Murphys, CA—who, at the time was with the California Strawberry Commission based in Watsonville, says the industrywide initiative to switch to plastic clamshells started with grower-shipper Driscoll’s, Inc. which was looking for a way to put a lid on bush berry containers to help with shrink.

“Conversations ultimately progressed into blue-sky dreams of having an enclosed consumer container for strawberries,” Jewell says.

“At the time, there was increased acreage and increased pushback from the retail industry due to shrink, consumer complaints about quality, and general concerns about produce department labor to manage strawberry displays,” she explains.

Such a change, however, would require everyone’s buy-in. It would also cause fundamental changes throughout the berry picking, packing, and shipping process.

Jewell says the industry was also worried about losing the beauty of displays.

“The concern with consumer acceptance was the fact that the wonderful smell and color of walking into the produce department would be lost,” she points out. Worse yet, it was believed that “impulse purchases would also be lost behind a sea of plastic.”

Joe Watson, vice president of domestic business development for the International Fresh Produce Association (IFPA), headquartered in Newark, DE, says the berry deal was certainly growing fast, but the labor needed to handle it was overwhelming.

It took hours to work up a pallet of more than 100 10-pound flats of strawberries into retail packs at store level, but some retailers were still hesitant to make the change to plastic.

The new plastic clamshells looked sterile, explains Watson. And Jewell says smaller chains and foodservice liked the open cases or punnets because they were getting more poundage than those who switched to clamshells.

“But think of the labor it took,” Watson observes. “We weren’t thinking about how [making the switch to clamshells] was going to mean selling more strawberries.”