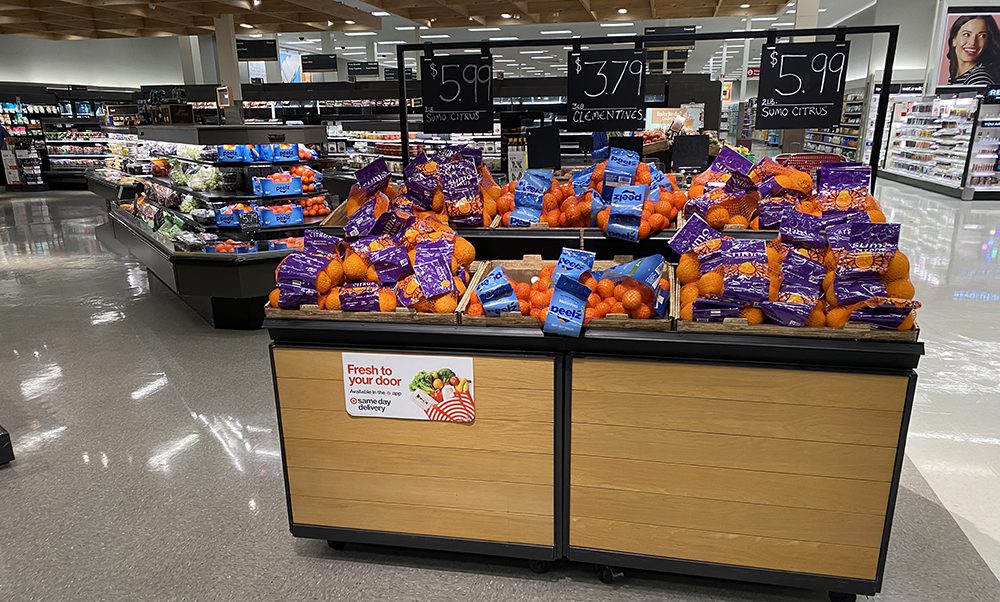 Target Corporation BB #:166987 is having difficulties.

The general media consensus is to blame this drop (like everything else at the moment) on inflation. The idea is that since Target relies more on discretionary items than competitors like Walmart, it is more vulnerable to higher prices for things people don’t have to buy immediately.

Hey, but there’s good news! Second quarter revenue was $26 billion, up a whopping 3.3 percent from a year earlier.

But wait a minute. Consumer prices were up 9.1 percent at the end of June, compared to 2021.

In that light, a sales increase of 3 percent is, in real terms, a drop.

The business press focuses on inflation and the effects of tightening inventories, but as a Target shopper, I would say the answer is more obvious: hostile and apathetic staff, poor organization, and the irritation of seeing your own mug on the screen at self-checkout, reminding you that Big Brother is watching.

The Target I go to is on County Farm Road in Wheaton, IL (in case its incompetent manager happens to be reading this article).

If this particular store is at all typical of Targets everywhere, the chain is in deep trouble.

Maybe they are clearing their inventory. But which inventory? Their grocery shelves are often empty in the late afternoon. I have seen whole aisles of paper goods whose shelves were empty, just like at the height of the pandemic.

Like many stores, my local Target is remodeling, which, like all such efforts, is “to serve you better.”

When I went a week ago to buy some shampoo, it wasn’t where it used to be. Fair enough, under the circumstances.

But I asked two different clerks where the shampoo was, and they were both unable to give me a clear answer. Nor did they show the slightest interest in helping me find it.

And this is not some little out-of-way item. It has a whole aisle devoted to it.

It was not the greatest test of my intelligence to find the shampoo section. But two employees who didn’t know where it was? Who had not the slightest interest in helping me find it? That’s not good.

My wife, who used to shop there far more often than me, is boycotting the store. She doesn’t like the sense of constant surveillance. And unlike me, who have found the staff merely apathetic, she has often found them insolent and hostile.

It’s America! That means there are plenty of other places to shop.

The business pundits can talk all they want about inventories and inflation. It seems very likely to me that Target’s troubles are rooted in poor personnel management.

It’s logical to assume that, as in most cases, the lowest-level people are treated the worst. Who is left for them to take out their frustrations on?

The customers, of course.

Since the customers are the people who are bringing in the revenue, this is not a good policy.

Target CEO Brian Cornell says, “The team is energized and ready to serve our guests in the back half of the year.”

Really? How can we tell?

Not being a business analyst, I can give no intelligent prognosis of Target’s future.

But I think it is a poor sign when customer service is not the top concern for a retail business. It is showing signs of a disease that could prove terminal if not checked very soon. Equally big and impressive chains have failed for reasons like this.

CORRECTION: An earlier version of this column misstated earnings figures.