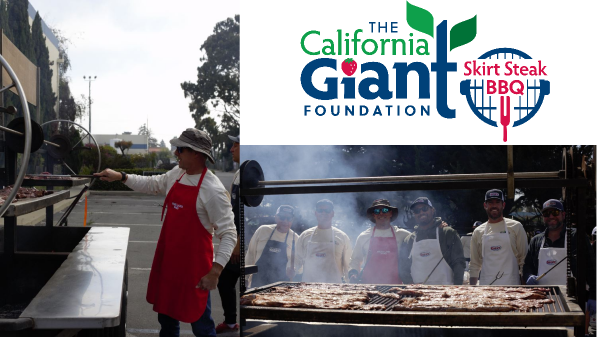 The annual BBQ—now in its 16th year—was initiated by the California Giant Berry Farms sales office in 2006 and provides funds for the causes and local organizations that the company supports. What began with a lunch for about 50 people has transformed into a community-wide tradition and is now one of the largest fundraising events put on by the California Giant Foundation.

Toward the end of the year, the cumulative total of funds raised during the BBQ and other fundraising events from the year are divided amongst several non-profit organizations. In addition, every dollar raised by this event is matched by the Founder of California Giant Berry Farms, Bill Moncovich.

“This is an all-hands-on deck event, organized and run by the staff of California Giant’s headquarters office—from the pre-planning organization, donation solicitations, purchasing of ingredients, selling of tickets, all the way down to the cooking,” said California Giant Director of Sales, Nick Chappell. “These lunches are homemade from the dedicated generosity of the California Giant staff who live and breathe the company’s vision and values of giving back to our community.”

To learn more about the critical work led by the organizations featured visit https://promos.calgiant.com/california-giant-spreading-smiles

About The California Giant Foundation

From the beginning, charitable giving of time and money has been a vital part of California Giant Berry Farms. Today, the company gives countless hours and tens of thousands of dollars to non-profits across the nation on an annual basis. In 2015, The California Giant Foundation was formed to unify the berry grower’s philanthropic initiatives and amplify the size and scope of their giving back. The California Giant Foundation consists of four pillars that inspire all of the charitable gifts, events and partnerships given or organized by the group, which include childhood obesity and school nutrition, hunger and food insecurity, prevention and awareness, and community.

California Giant Berry Farms started small. Formed out of a passion for top-quality strawberries and the optimal growing conditions of the Pajaro Valley, three lifelong friends teamed-up with a simple mission in mind – provide only the finest strawberries and give back to the community that raised them. Nearly 40 years later, California Giant has grown into a global family of people passionate about delivering the best strawberries, blueberries, raspberries and blackberries. Quality, consistency and community inspire the mission and values that continue to sustain us. Because the bigger the smile, the better.