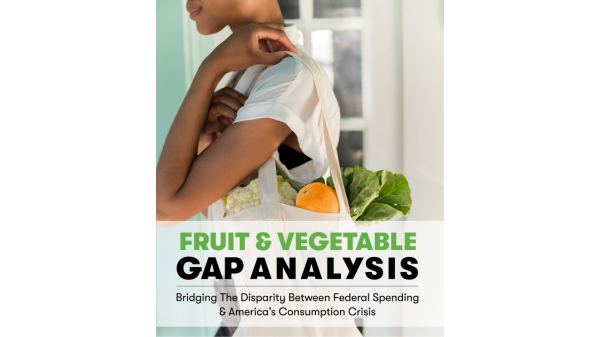 The produce industry must work together to persuade U.S. government agencies to fund fruit and vegetable consumption initiatives in order to improve public health.

“The broad public health community agrees that fruit and vegetable consumption should be a primary focus,” Kapsak said.

The gap analysis isn’t just a report for government leaders, she said.

“This analysis is for our whole industry, the whole supply chain, because we have a vested interest that federal spending should be increased,” Kapsak said. “America is experiencing a crisis, and Congress is in the position to fund programs to help Americans improve their produce consumption.”

PBH says most Americans are not eating enough fruits and vegetables despite the well-established evidence on their role in optimizing health and reducing chronic disease risk.

The report says the annual economic cost of America’s pervasive and persistent consumption crisis was an alarming $98.2 billion in 2020 and is projected to grow to $137 billion by 2030.

Kapsak said produce companies, through their commodity and trade associations, need to better influence policies over the next 18 months, as Congress debates funding the farm bill.

PBH hopes the report is timely, considering the recent White House announcement regarding a September 2022 conference on hunger, nutrition, and health to recognize nutrition insecurity challenges in our country.

“The nutrition part of the farm bill is a huge opportunity for fruits and vegetables,” she said, and she wants the gap analysis to be a resource during farm bill negotiations.

Every five years, Congress passes legislation that sets national policy for agriculture, nutrition, conservation, and forestry, known as the farm bill. The last one was signed by President Trump in December 2018, and hearings for the 2023 farm bill began this spring.