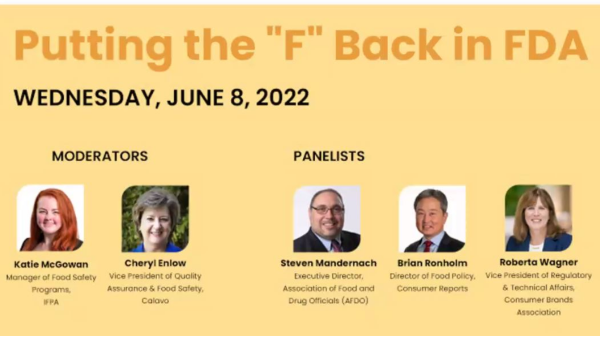 The Food and Drug Administration (FDA) is doing a lousy job in managing food safety for Americans.

I won’t even say that that was the verdict of a panel at a Virtual Town Hall webinar sponsored by the International Fresh Produce Association BB #:378962 on Wednesday, June 8.

It was the premise.

“We need the food program to fulfill its role effectively, and we’re not seeing that,” remarked panelist Brian Ronholm of Consumer Reports.

“We were seeing things that weren’t making good public health sense coming from FDA,” observed another panelist, Steve Mandernach of the Association of Food and Drug Officials, which encompasses state regulatory agencies.

For instance, if FDA received a complaint about a specific grocery store, it would forward the name of the store to state regulators without providing any more information, according to Mandernach.

Each is headed by a deputy commissioner. Each one reports directly to the Commissioner of Food and Drugs, Robert Califf.

According to Wagner, there are somewhere around 25 deputy commissioners who report directly to Califf. Meaning that he is a very busy and important man. Moreover, like most of his recent predecessors, he has a medical background. Meaning that food safety isn’t at the top of his list of priorities.

“We need people with relevant experience,” said Mandernach. “Fifty years ago, the FDA commissioner was knowledgeable about food safety.”

The solution most discussed was appointing a “deputy commissioner with line authority covering all foods programs,” as Wagner put it.

In case you’re like me and didn’t know what “line authority” is, it means “the power given to someone in a supervisory position to mandate actions by subordinates.”

Such a commissioner would have to be a “strong leader,” Wagner emphasized and would need to “break down” the silos of the different agencies, which have extremely divergent organizational cultures.

As Wagner added, Mike Taylor, FDA Commissioner for Foods and Veterinary Medicine under the Obama administration, held this role and fulfilled his position capably.

“The result is that the agency fails to come anywhere close to meeting most American consumers’ basic expectations of government oversight on food safety and nutrition,” noted an April exposé in Politico.

The panel also discussed one long-mentioned possibility: setting up an independent food agency along the lines of the Environmental Protection Agency (EPA), which would combine all food regulatory functions.

But they did not think this was politically feasible in the near future.

One reason? Some of these agencies are run by one department (USDA) and some by another (Health and Human Services).

The “different funding streams” would lead to interorganizational competition. USDA would not be eager to sacrifice some of its budget for HHS, and vice versa.

If you’ve read a previous column of mine, you have my answer: create an independent Department of Food, headed by a cabinet-level secretary. This department would be funded directly by Congress, obviating competition between departments and making it much easier to integrate food safety efforts.

I would imagine that this possibility is, at present, still more remote.