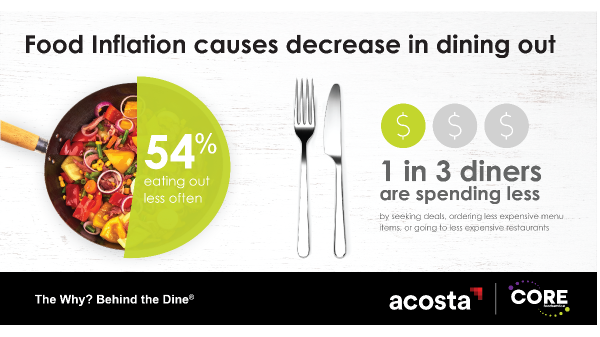 I’ve read a few reports lately that, while they are foodservice-focused, raise concerns for grocery retailers as we round the corner into summer and beyond.

Pre-pandemic, foodservice and dining out were slowly eating away at share of consumers’ wallets. Of course, that reversed during lockdowns with consumers spending most of their time – and money – on food at home.

We all predicted a major resurgence in dining out, but inflation appears to be putting a damper on some of those plans.

Acosta, in its most recent Why Behind the Dine, says 54% of respondents said they plan to dine out less often, citing inflation as the primary reason.

“About one-third are choosing to trade down rather than trade out, opting for less expensive restaurant and meal options to counter rising prices,” the report said.

It looks like everyone’s pandemic sourdough starters are suffering the same fate as my own Vincent Van Dough – neglected in the back of the fridge. We don’t want to cook, but budgets also can’t bear dining out every night.

This is where retail, especially retail-foodservice, has a huge opportunity.

Retailers have made tremendous inroads into offering ready-to-eat and ready-to-cook meals over the past decade. Now is the time to push these options with consumers, especially as a less expensive option than dining out.

That should be strategy No. 1 going into the summer. Think picnics, salads and sides that span multiple meals, cut veggies and fruit to combine with a homemade sandwich to feed the kids a healthful lunch rather than a quick trip to fast food. The peanut butter and jelly sandwich has definitely reemerged on our menu this spring, and I see it as a mainstay this summer.

“We have food at home,” is probably my family’s least favorite phrase right now, but it’s a valuable tool to keep the budget in line.

Retailers I can count on to make that “food at home” easy and inexpensive are going to gain a lot of points – and loyalty – from me this summer.