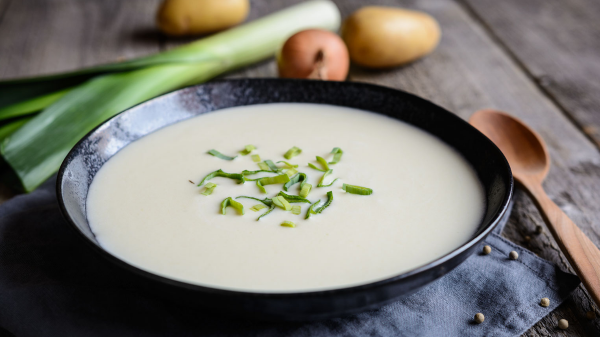 Vichyssoise is a French potato-leek soup, served cold. It can be delicious, but nobody seems to serve it anymore.

That is probably because of a disaster that befell the Bon Vivant canned food company in 1971.

That summer, a man and his wife died after contracting botulism from a can of Bon Vivant vichyssoise.

That event led to the demise, not only of the ill-fated Bon Vivant company, but of vichyssoise as a viable dish.

I was a teenager then. This is the first food scare that I remember.

It had an impact. Comedians mentioned vichyssoise in ways that weren’t funny if you produced the soup. Charles Addams, cartoonist of the macabre (as in “The Addams Family”), drew a panel showing Uncle Fester hoarding a pile of vichyssoise cans.

As I mentioned, I’ve been reading Outbreak: Foodborne Illness and the Struggle for Food Safety by law professor Timothy Lytton, which has a chapter on canned foods.

(I will probably write on the leafy greens chapters after I have read them.) It discusses the Bon Vivant case in detail.

Bon Vivant issued a recall of all cans with the lot number of the contaminated items even before the Food and Drug Administration (FDA) contacted them. Nevertheless, the FDA forced the company to recall all canned products. On July 27, 1971, the 108-year-old Bon Vivant company filed for bankruptcy.

Bon Vivant CEO James Paretti complained that the FDA behavior was “unnecessarily cruel.” He even contended that he could not supply requisitioned documents partly because the FDA inspectors had run through them in a haphazard and frenzied manner.

Lytton’s account presents a far different picture of the FDA than today’s distracted and befuddled agency. Ralph Nader was pursuing his then novel tactic of consumer advocacy, and it didn’t help that FDA hadn’t inspected the Bon Vivant plant for four years previous.

Overreaction was a likely response.

Industry charges against the FDA’s handling of the case were numerous. The Washington Post quoted one anonymous source as describing the Bon Vivant recall as “the god-damnedest case of overkill I have ever seen in my life.”

There are a number of lessons to be learned from this fifty-year-old incident. In the first place, regulatory incompetence can take the form of overreaction as well as neglect. In this instance, it was probably a matter of initial neglect followed by hasty actions that were poorly thought through.

There is also what is known as the theory of “regulatory capture,” to which a large sector of the American people subscribes without ever having heard of it. It is the idea that industry interests dominate regulatory agencies to a degree that is contrary to the public interest.

This theory is neither completely true nor completely false. Regulatory oversight of food safety has always been spotty: there is simply too much product out there and too few inspection agents to cover all of the food produced in the United States (not to mention imports).

Thus, industry compliance is always going to be a key factor in food safety. This is not impossible inasmuch as the vast majority of producers understand full well that their survival depends upon a spotless sanitation record. Regulators can then focus on a few outliers who are too greedy and stupid to care.

In a free society, food safety is always going to be maintained by a tense balance between industry interests, government regulation, civil litigation, and media and public perceptions. It is not a perfect system and never will be. But it is hard to imagine how something better can be devised.