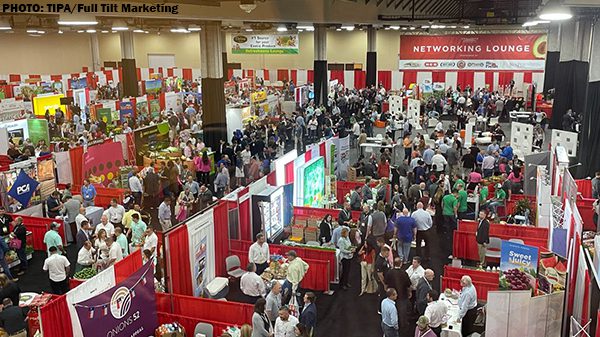 The busy floor said it all, according to Melinda Goodman of Full Tilt Marketing, in this overview image of the trade show floor at Viva Fresh in Grapevine, TX.

GRAPEVINE, TX—I recall a certain trepidation about attending Viva Fresh in 2021. People weren’t sure it was time to get out yet, COVID vaccines hadn’t been approved for the general population yet, and masks were still required in public.

And yet, the show went on, and most attendees said it was nice to see people in person, and it met lowered expectations.

Fast forward a year, and trade shows have come roaring back. Viva Fresh’s attendance was officially about 2,200 – on par with pre-COVID events, but it seemed a lot busier than I remembered.

The Texas International Produce Association’s BB #:162361 7th annual event was packed from the first of two sold-out golf tournaments on April 21 through to the very end of trade show break-down on April 23.

Well into hour three of the expo, I was still swimming up stream in the aisles. That’s not your typical pre-COVID expo floor.

The pent up demand for in-person events is reassuring for many of us in the industry. Shay Myers of Owyhee produce put it well in a LinkedIn post, saying this year’s Viva Fresh is one of the best trade shows he’s attended…ever. Here’s why:

“I think that two years of not doing shows is one of the best things that ever happened for those of us already in the industry. It made us value it that much more.” He said in the video, which can be viewed here.

Everyone I talked to at the show had a similar experience. Sure, there were the usual “could have seen more buyers,” that you hear at nearly every show, but overall people were thrilled to be there.

One person told me that business discussions maybe took a back seat to conversations more focused on catching up on our personal lives. They weren’t complaining as it was more of an observation – an observation I’d expect from an industry that prides itself on personal relationships and connections.

TIPA’s Dante Galeazzi said the show was a tremendous success.

“It was three days of constant excitement,” he said. “As show planners, it feels very rewarding and humbling to hear the great reviews keep coming in.”