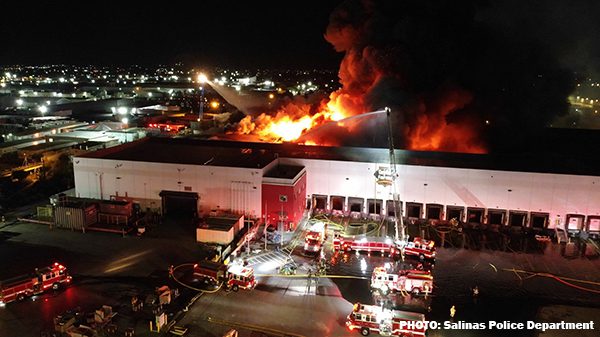 In an interview with KSBW Action News, Bruce Taylor, chairman and CEO of Taylor Fresh Foods Inc. BB #:154001, said a fire at the company’s Salinas, CA, foodservice processing facility is a near total loss, and engineers are working up plans to rebuild.

“We believe by this time next year we’ll have a new plant up and running,” Taylor said, in the interview.

The fire, which started April 13, was believed to be caused by a welding accident, Taylor said. The Salinas Fire Department has not released the official cause.

Part of the facility, including the shipping docks, may be salvageable, but the processing floor is not, Taylor said, in the interview.

“I thought we might be able to save some equipment that I saw a video of this morning and it’s just a melted pile of steel, so that’s a total loss,” he said.

The company said in a statement it plans to process at its Yuma, AZ, facility, where it operates during the winter season. Transporting product to Yuma will, however, negatively affect shelf life, Taylor said.

“We’ve got usually a 14-day shelf life. And so if you have to bring it back up here you take about two days out of the shelf life. So, it’s not optimal,” Taylor said.

The company plains to retain and reassign the estimated 700 people employed at the damaged facility while it is rebuilt.