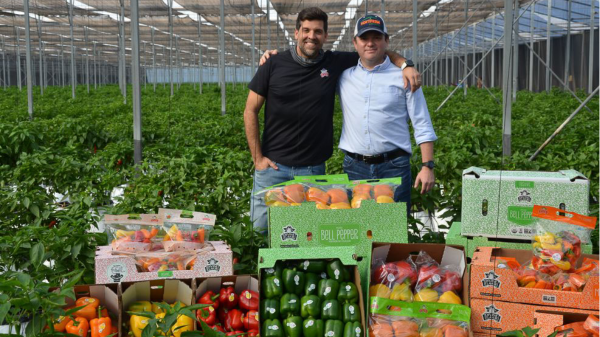 Unlike some of my colleagues, I’m not at the annual meeting of the Canadian Produce Marketing Association (CPMA) BB #:153602 in Montreal, but I did have a long phone chat with Michael DuPuis, quality assurance and public relations manager for Nogales, AZ-based Divine Flavor BB #:204689, who was at his company’s booth there.

Michael gave me a quick overview of his company, one of the largest suppliers of peppers and table grapes in Mexico.

“Founder Alan Aguirre, alongside Pedro Batiz and Carlos Bon, formed the company around 15 years ago to create a brand that stands for an ethically responsible company that produces organics and gives more than is taken away,” said Michael.

Products supplied by Divine Flavor include specialty grape, Roma, and beefsteak tomatoes and cucumbers in addition to table grapes, peppers, and sweet mini-peppers.

“We believe we grow some of the best cucumbers in Mexico,” he says. The company’s production is based 100 percent across Mexico, and “70 percent is grown in greenhouses.”

Divine Flavor’s program in western Mexico supplies peppers from November through May, although the company is expanding operations in Jalisco in order to supply its customers on a year-round basis. The pepper line is pretty evenly divided between green and colored varieties.

Like many in the industry, Michael and his company see sustainability as a theme of major importance both now and in the future.

“We are a six-pillar company,” he explains. The pillars on which Divine Flavor rests are “good quality, food safety, social responsibility, traceability, organics, and sustainability.

“Our minds are on trying to grow the best-quality products we can,” says Michael, nothing that the company is implementing “organic, socially responsible farms and fair trade.”

Divine Flavor’s product line is about 50-50 conventional and organic, but Michael notes that the company applies organic practices such as “restoring nutrients to soils” even to many items that are labeled as conventionally grown, and tracking carbon emissions.

During the convulsions of the past two years, Michael says he has seen “increased interest in eating healthier. Organic sales were up over the last two years. People have more time at home and more time to cook healthier meals.”

“For us, it’s really important to stay true to our roots, perfecting what we have in place, to be reliable and consistent for our customers,” he concludes.