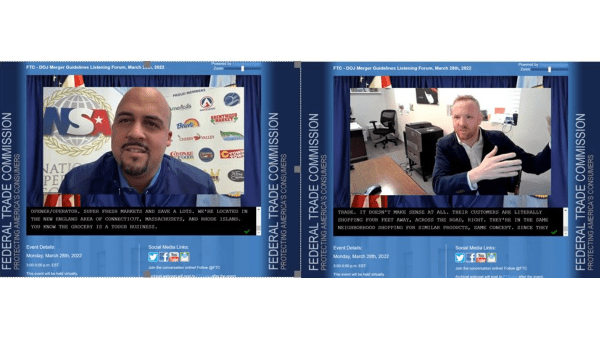 L to R: Anthony Pena, Owner of City Supermarkets; and Tom Charley, co-owner of Charley Family Shop N’ Save provide remarks during public forum hosted by the FTC and DOJ.

FOR IMMEDIATE RELEASE — March 28, 2022 — Washington, D.C. — Two independent grocers testified today on behalf of the National Grocers Association BB #:163424 to the Federal Trade Commission (FTC) and the Department of Justice (DOJ) Antitrust Division on how anticompetitive tactics by dominant retailers in the grocery marketplace leads to unfair conditions for independent grocers.

Tom Charley, co-owner of Charley Family Shop N’ Save BB #:201555 in Greensburg, PA and Anthony Pena, owner of City Supermarkets located in Norwalk, CT provided remarks on how consolidation in the food retail marketplace has resulted in unchecked buyer power in which a few dominant firms are able to set favorable terms, prices and product allocation for themselves.

These discriminatory tactics are already prohibited but antitrust laws have not been enforced by regulators in decades.

Charley, a fourth-generation retailer, spoke about how his great grandfather emigrated from Syria in 1900 and sold produce door to door before opening his own food distribution business. The family now has three “Shop N Save” grocery stores within a 15-mile radius in Pennsylvania, but they are the only local independent retailer in the area.

“Independent grocers don’t shy away from a challenge. But I want to address a challenge that’s gotten bigger over the years. That’s a few enormous, dominant retailers using their power to get around the rules designed to protect competition,” Charley said in his oral statement.

Pena is a second-generation Dominican supermarket operator, and owns nearly 10 grocery stores in Connecticut, Massachusetts, and Rhode Island under the Super Fresh and Save-A-Lot banners. He described how each of his stores is uniquely tailored to the communities they serve.

Today’s forum, which focused on food and agriculture, was held as part of a series hosted by the FTC and U.S. Department of Justice to hear from those who have experienced firsthand the effects of mergers and acquisitions.

NGA is the national trade association representing the retail and wholesale community grocers that comprise the independent sector of the food distribution industry. An independent retailer is a privately owned or controlled food retail company operating a variety of formats. The independent grocery sector is accountable for about 1.2 percent of the nation’s overall economy and is responsible for generating more than $250 billion in sales, 1.1 million jobs, $39 billion in wages and $36 billion in taxes. NGA members include retail and wholesale grocers located in every congressional district across the country, as well as state grocers’ associations, manufacturers and service suppliers. For more information about NGA, visit www.nationalgrocers.org.