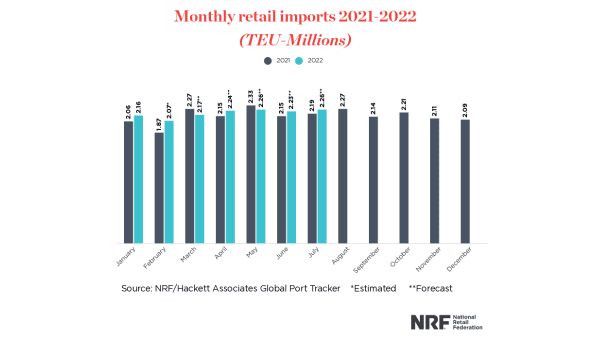 March 8, 2022 WASHINGTON – Imports at the nation’s major retail container ports are expected to be at near-record levels this spring and summer as consumer demand and supply chain challenges continue to result in congestion, according to the monthly Global Port Tracker report released today by the National Retail Federation and Hackett Associates.

“Consumers are still spending and the supply chain is still working to keep up,” NRF Vice President for Supply Chain and Customs Policy Jonathan Gold said. “Growth rates have slowed down from the off-the-charts numbers we saw last year, but volume is close to the highest we’ve ever seen. Everyone in the supply chain is trying to reduce congestion, but there is still work to be done. Retailers are also planning for potential additional disruptions this summer from West Coast port labor contract negotiations.”

NRF recently sent a letter urging the International Longshore and Warehouse Union and the Pacific Maritime Association to begin contract negotiations well before their July 1 contract expiration to avoid any delay in reaching a settlement and additional congestion that might result.

“Congestion continues on both coasts, with ships queuing for berths at multiple ports,” Hackett Associates Founder Ben Hackett said. “Problems remain with clearing import containers to their inland destinations while export containers are still being held back due to lack of space at the terminals. Until supply chain problems are sorted out with more drivers, trucks and inland storage space, we do not expect to see a rapid decline in the backlogs being experienced.”

U.S. ports covered by Global Port Tracker handled 2.16 million Twenty-Foot Equivalent Units – one 20-foot container or its equivalent – in January, the latest month for which final numbers are available. That was up 3.6 percent from December and up 5.2 percent year-over-year.

Many of those monthly totals will come close to the record of 2.33 million TEU that was set in May 2021, which was up more than 50 percent year-over-year because of the shutdown of stores and overseas factories in the spring of 2020.

How to build a stronger and more sustainable supply chain will be addressed as retailers, industry experts and technology innovators meet at the NRF Supply Chain 360 conference in Cleveland in June.

Global Port Tracker, which is produced for NRF by Hackett Associates, provides historical data and forecasts for the U.S. ports of Los Angeles/Long Beach, Oakland, Seattle and Tacoma on the West Coast; New York/New Jersey, Port of Virginia, Charleston, Savannah, Port Everglades, Miami and Jacksonville on the East Coast, and Houston on the Gulf Coast. The report is free to NRF retail members, and subscription information is available at NRF.com/PortTracker or by calling (202) 783-7971. Subscription information for non-members can be found at www.globalporttracker.com.

About NRF
The National Retail Federation, the world’s largest retail trade association, passionately advocates for the people, brands, policies and ideas that help retail thrive. From its headquarters in Washington, D.C., NRF empowers the industry that powers the economy. Retail is the nation’s largest private-sector employer, contributing $3.9 trillion to annual GDP and supporting one in four U.S. jobs – 52 million working Americans. For over a century, NRF has been a voice for every retailer and every retail job, educating, inspiring and communicating the powerful impact retail has on local communities and global economies. www.nrf.com