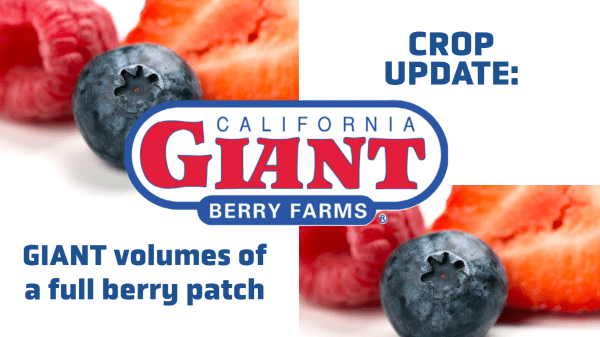 “Florida strawberries are currently hitting their peak. We’re seeing a week-over-week increase in top quality fruit, and we’re expecting solid volumes out of Florida through late March,” shared J.T. Tipton, district manager at California Giant Berry Farms. “Simultaneously, mild winter weather conditions, coupled with healthy plants have pushed our Southern California strawberry supply about 15% ahead of where it was last year at the same time.”

Tipton’s confidence comes with an asterisk. He echoes industry-wide challenges that have plagued produce since the start of the pandemic. Inflation, labor issues and logistics are still problematic, despite Florida peaking and Southern California’s peak volumes being on the horizon.

“We’re anticipating peak volumes out of Oxnard to start in late March and throughout April. Santa Maria is not far behind with their peaks anticipated in April throughout May. Watsonville and Salinas are gearing up to start harvesting as early as next week; I expect the area to hit its peak in June. As a whole, we’re looking at a very strong volume in May – which is great timing to compliment National Strawberry Month promotions.”

“Despite the uncontrollable challenges from South America causing an early exit and our Florida-Georgia blueberry farms enduring an unprecedented freeze, blueberry production is still on track to beat all-time highs for the company,” said Duran. “The Florida blueberry season is about two weeks away from harvest with a potential loss of 10-15% looming. We’re still confident our Florida growers will kick off the domestic blueberry season strong.”

Additionally, California Giant Berry Farm’s Oxnard organics program has increased production every week since the beginning of December, with its peak strategically planned earlier than ever, perfect for meeting ever-growing consumer demand for stateside blueberries. Duran looks forward to peak volumes out of Oxnard forecasted for mid-March through May.

For the remaining berry patch — raspberries and blackberries — positivity is shared. California Giant’s acreage of bush berries has increased across the board, making a consistent supply of exceptional fruit available to customers year-round.

California Giant Berry Farms started small. Formed out of a passion for top-quality strawberries and the optimal growing conditions of the Pajaro Valley, three lifelong friends teamed-up with a simple mission in mind – provide only the finest strawberries and give back to the community that raised them. Nearly 40 years later, California Giant has grown into a global family of people passionate about delivering the best strawberries, blueberries, raspberries and blackberries. Quality, consistency and community inspire the mission and values that continue to sustain us. Because the bigger the smile, the better.