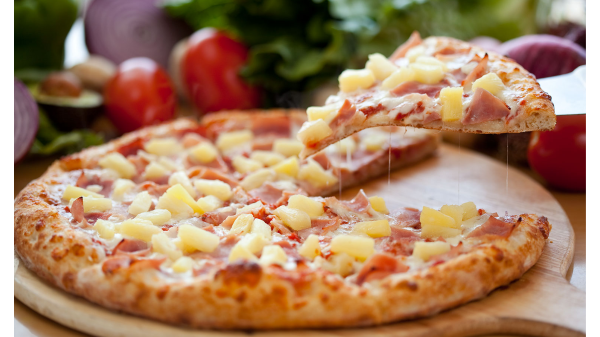 To deal with yet another deeply polarizing subject, let me turn to pineapple pizza.

It is a matter about which I have no opinion whatsoever. It has never sounded good to me, and I have never tried it. (File under “Don’t know what you’re missing.”) If I remember correctly, it originally started off paired with ham and marketed as “Hawaiian pizza.”

Today pineapple pizza has begun to take off on its own, even apart from its porcine spouse. A new Slice of the Union Report from Slice, a food ordering app that services 18,000 pizzerias nationwide, shows that last year, orders of pineapple pizza shot up by 76 percent.

In fact, produce pizza add-ons fared pretty well. Although pepperoni remained king (accounting for 37 percent of orders), mushrooms came in second, with 10 percent of orders. Onions were a bit further down the column, at 6.3 percent, while green peppers were at 3 percent.

Spinach just barely made the top 15 items, accounting for 1.84 percent of orders—just ahead of pineapple, which, despite its huge percentage gain, still appeared on only 1 percent of pizzas.

I omit black olives and jalapenos, because these are usually canned, at least as they manifest in the pizza world. (But then how much pineapple on pizzas is fresh versus canned?)

A state-by-state map of favorites showed some curious results. You might have expected that veggie pizza would be number one in California, Washington state, and countercultural Vermont, but Nebraska, Montana, Idaho, and Mississippi? Meat lovers’ pizza made it to the top only in North Carolina.

Hawaiian pizza made the top in Oregon, Missouri, North Dakota, and Ohio, but not in Hawaii itself, where the preferred version is thin-crust.

I like white pizza myself (along with diners in Maryland, Virginia, Pennsylvania, and Rhode Island). But things must have changed in my native Connecticut since the last time I was there seven years ago, because I don’t remember it ever being particularly prominent there. Now it’s on top.

One other trend of interest to the produce industry is that dairy-free pizza is 333 percent more popular. While this category could embrace any number of variations, the dairy-free pizza shown in the Slice report is covered with vegetables—fresh basil, red and yellow peppers, and what appears to be a whole clove of garlic.

For years now, I have backed off from my own personal favorite, combining bacon, pepperoni, and anchovies (dubbed the “thirst pizza” by an ex-girlfriend). Currently my preferred kind, at least as far as actual consumption is concerned, is leftover—from the pizzas, mostly plain cheese, that are the chief staple of my sons’ existence.

Don’t get me wrong, though. I’m willing to try pineapple pizza. But it’s going to have to be a slice of someone else’s, because I don’t want to make the commitment of buying a whole one.