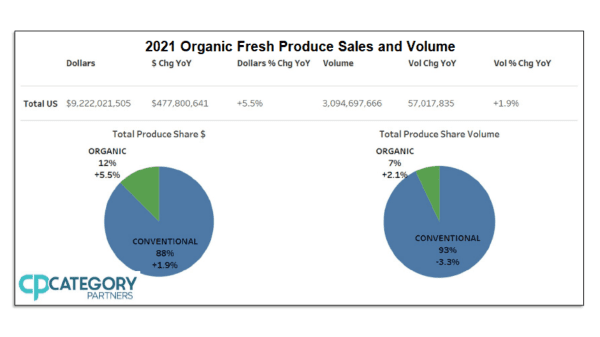 You can define success in lots of ways. In economics, one way is year-over-year growth. By that token, things look pretty good for organic produce.

“Organic fresh produce grew sales by 5.5 percent in 2021, topping $9 billion for the first time, and outpaced conventionally grown produce in year-over-year gains in both sales and volume,” according to the 2021 Organic Produce Performance Report released by Organic Produce Network BB #:338018 and Category Partners.

Price premiums over conventional varied widely. At the top were packaged salads, with a $3.11 per pound premium over conventional. The premium for berries was in the range of approximately $2-3 per pound. At the bottom were bananas, at 15 cents per pound.

Price increases vis-à-vis conventional were comparatively small. The per-pound retail average price for conventional increased by 8 cents a pound, while for organics it was 9 cents.

Organic volume increased by 2 percent year over year, as compared to -3.3 percent for conventional produce. Organic bananas led in volume, with 547 million pounds, an increase of 3.4 percent over 2021.

Organic produce now accounts for 12 percent of the market share, with 88 percent going to conventional.

The organics industry is upbeat about its future.

“As of right now, we really don’t see any signs of sales comps declining any time soon,” said John Savidian, senior director of produce and floral for Gelson’s Markets, based in Encino, CA. “I think that the pandemic brought on some extra precautions and awareness when it comes to safety, and, in particular, food safety. I truly do feel shoppers felt better about buying organics during the pandemic.”

Some sources highlighted the decline in percentage growth from 2020, when it was in the double digits. Supermarket News ran the headline “Organic fresh produce sales growth tails off in 2021.”

Does this growth slowdown indicate that organic produce is slipping into the third phase of the industry life cycle, which spans four phases: introduction, growth, maturity, and decline?

“Entrepreneurs thrive in high-growth evolving markets,” says Inc. magazine. “There is more revenue to compete for every year, and entrepreneurial innovation can be a key driver of value creation. However, every growth market must mature eventually, and entrepreneurs must be able to navigate the transition to maturity.”

1. Customer needs/desires do not appear to be evolving rapidly.

3. Disruptive innovations and new entrants are gaining share only gradually and top out at relatively low levels.

4. Market shares of leading competitors have solidified and are changing gradually, if at all.

6. Cash flows are increasingly turning positive and being returned to investors rather than invested into the market.

These criteria don’t apply to organic produce yet. They suggest that a drop from double-digit to single-digit growth in and of itself is not a sign of a maturing industry. In all likelihood, the organic produce industry will continue to stretch and expand over the foreseeable future.

But it never hurts to keep an eye on the long term.