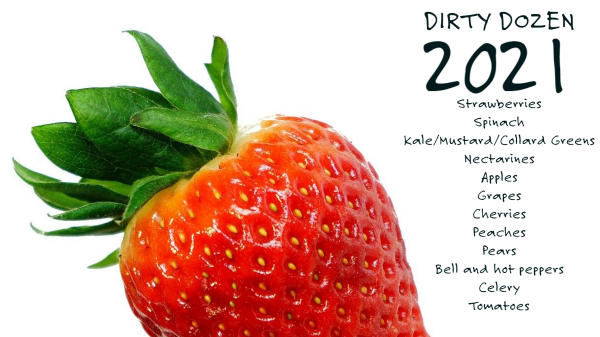 The Environmental Working Group’s annual Dirty Dozen list of “most contaminated” fruit and vegetable items, was released in March.

Editor’s note: A previous version of this story failed to include pesticide data background critical to understanding the issue. That has now been included.

Lee Marvin. Telly Savalas. Charles Bronson. I loved going to see “The Dirty Dozen” with my father when it came out in 1967.

The produce industry feels about another Dirty Dozen the way those Nazi officers felt about Marvin’s band of misfits.

Yes, folks, it’s the Environmental Working Group’s (EWG) list of the twelve fruit and vegetable items that are, by its reckoning, most contaminated with agrichemicals. Excoriating this list is as much an annual event for the produce industry as the Super Bowl.

When talking about pesticide residue on food, both the EWG and produce industry advocates use the USDA’s Pesticide Data Program (PDP) annual summary. The USDA released its 2020 edition in mid-January which shows that more than 99 percent of the samples tested had pesticide residues below benchmark levels established by the Environmental Protection Agency (EPA).

The Alliance for Food and Farming says the PDP report should reassure consumers that they can enjoy their favorite fruits and vegetables and purchase whatever forms are most accessible and affordable for themselves and their families.

“The PDP tests a wide variety of domestic and imported foods, with a strong focus on foods that are consumed by infants and children. EPA relies on PDP data to conduct dietary risk assessments and to review the maximum amount of a pesticide allowed to remain in or on a food.

In addition to underscoring the safety of fruits and vegetables, these results show the exceptional level of compliance among farmers with the stringent laws and regulations governing the use of pesticides on organic and conventional farms.”

I will be looking into the Dirty Dozen in a feature article in the May/June issue of “Produce Blueprints” magazine, but as an advance taste, I thought I would share some excerpts from an email interview with Alex Formuzis, senior vice president, communications and strategic campaigns for the EWG.

Could you explain the main objective of the Dirty Dozen list?

EWG believes consumers, including parents, deserve to know if the food they buy and feed their families could come with a variety of toxic pesticide residues. There are a number of conventional produce items that consistently have multiple residues even after USDA researchers thoroughly wash and prepare them before they test the samples for pesticides. The Dirty Dozen list gives shoppers a handy tool letting them know which types of produce they may want to buy organic in order to better protect their families, including children, from consuming a number of different pesticides.

The produce industry as a whole has been extremely critical of the Dirty Dozen list. It says that the list overlooks the fact that even those items on it have pesticide levels that are far below the maximum allowable dose. Could you please respond?

Just because the levels of pesticides detected on produce may be below the legal limits set by EPA doesn’t mean they are safe. The conventional produce industry fights tooth-and-nail every time federal or state government agencies work to either lower the legal limits or ban a pesticide over concerns for human health, sometimes claiming there won’t be any fruits and vegetables on store shelves if a pesticide is revoked. One of the reasons for their attacks on the Shopper’s Guide is the fact that the organic industry’s annual sales are consistently in the double digits, while conventional sales have not enjoyed the same steady and robust growth.

Of course, representatives of the produce industry have their own take on these questions. Look out for our May/June issue for a fuller picture.

Thanks, by the way, to Iris Myers of EWG for making this interview possible.