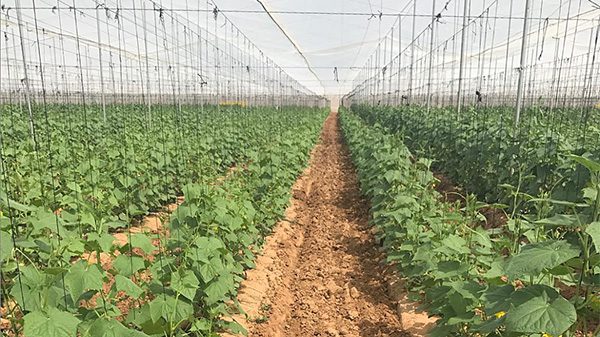 Cucumbers in a shade house.

Increasing imports, particularly from Mexico, have been a source of complaint for U.S. cucumber growers.

The default response is usually to blame lower production costs in Mexico, but a newly released report from the U.S. International Trade Commission (ITC) suggests otherwise.

The ITC has released its report on the effects of cucumber imports on the domestic industry, as requested by Robert Lighthizer, then U.S. trade representative, in December 2020. The study focused on fresh market cucumbers.

As the report indicates, Mexico has chiefly supplied the American market in the winter, when output in this country is reduced. Over the years, however, Mexico has expanded its production window and can now provide cucumbers year-round. The share of its production grown in protected agriculture (PA) has risen from 52 percent in 2015 to 62 percent in 2020.

A study highlighted in chapter 7 attempts to calculate the effect of imports on the U.S. industry.

“The model is calibrated with an estimate of actual fresh market cucumber domestic production and imports for both seasons [winter and summer] during 2015-20. The model then considers a counterfactual where the above-average import growth did not occur.”

These figures might suggest that the increase in Mexican imports is due to lower production costs.

Indeed, Mexico does have lower production costs, but these are less significant than might be expected. Moreover, they are offset by higher transportation costs.

“Imported cucumbers are generally priced above domestic cucumbers in wholesale market (where the cost of freight and other markups are included in the price),” the report concludes.

“The addition of transportation costs and other markups appeared to erode the relative price advantage of Mexican cucumbers in the East Coast wholesale market, the region where most cucumbers from the U.S. Southeast are sold. . . . Average prices for Mexican product were below those for the U.S. Southeast product in East Coast wholesale markets only 8 percent of the time from 2015 to 2020.”

The shift toward imports appears to result from consumer tastes: “Consumer demand for fresh market cucumbers in the United States has shifted away from the traditional American slicer toward burpless and snacking varieties, including English, Persian, and other mini cucumbers. These varieties . . . are seedless and have thinner skin, more flavor, and often less bitterness than American slicers.”

English and Persian cucumbers are primarily grown in PA settings, “resulting in a more uniform and higher quality product with longer periods of availability throughout the year, something that is important for the retail market,” according to the report.

Slicers remain the main choice in foodservice, because, as their name suggests, they hold up better against mechanical slicing. But even here, burpless varieties are starting to make inroads.

It would seem, then, that imports are indeed affecting U.S. domestic production, but it may be more a matter of quality than price.

The most important part of this report may be the opening of chapter 5, which points out that both Mexico and Canada offer “more highly differentiated goods,” while the U.S., with its emphasis on open-field slicers, is merely “moderately differentiated.”

What does that mean? See above. Consumers are going to seek out product with better taste and more consistent quality and which are better suited to snacking.