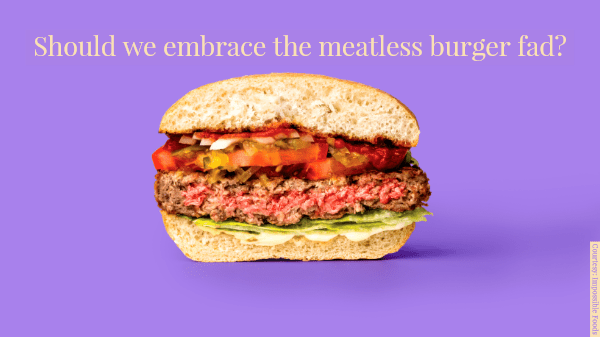 My colleagues at producebluebook.com have often stressed that “plant-based” foods aren’t the same as fruits and vegetables and shouldn’t be seen as surrogates for them.

“Plant-based” is almost a meaningless term. A box of macaroni comes from wheat; therefore it is plant-based. The flour and sugar (or, if you prefer, high-fructose corn syrup) in a box of doughnuts is plant-based as well.

In practice, however, the term has come to be applied to surrogate meat and dairy products made from an extraordinarily creative (though not necessarily appetizing) array of ingredients.

In a column for Canadian Grocer, Meghan McGee of the University of Toronto points out that plant-based food items aren’t necessarily healthier than the meat they’re imitating. In fact, they may be less so.

In one eye-popping paragraph, she writes, “The Impossible Burger, for example, is an impressive meat-free mix of soy, potato proteins, coconut and sunflower oils. It even bleeds like the real thing. At the same time its calorie count and saturated fat levels mirror a McDonald’s quarter-pounder, and it has six times more sodium.”

I didn’t think anything could have six times more sodium than a McDonald’s burger, except maybe a box of Morton Salt.

McGee cites one study from the Singapore Institute for Food and Biotechnology Innovation, which analyzed what would happen if you replaced “bacon, chicken, beef burgers and ice cream with animal-free versions.”

The outcome: “Diets that substituted animal products with the plant-based alternative were below the daily recommendations for vitamin B12, calcium, potassium, zinc and magnesium, and higher in sodium, sugar and saturated fat.”

Do you realize what that’s saying? There’s something out there that’s less healthy than bacon.

McGee also quotes Stephen van Vliet, a postdoctoral researcher at the Duke Molecular Physiology Institute, as saying that plant-based meat alternatives lack amino acids and derivatives, like creatine, taurine and anserine, “which can all have an impact on our health and potentially brain function as well as muscle function,” according to van Vliet.

These findings are not auspicious for meat and dairy substitutes. Plant-based alternatives aren’t any cheaper than real meat and milk; often they’re more expensive. Once the public realizes they aren’t healthier either, I suspect the market will plummet. Plant-based items of this sort may end up as objects of ambivalent future nostalgia, like MAGA caps and face masks.

There will no doubt be a continued market for meat and milk substitutes, but it will, I believe, ultimately consist of those who avoid the real thing because of humanitarian and environmental concerns, where these ersatz products have a stronger case to make.

Since the middle of the twentieth century, the verdict has consistently come out the same: the closer you eat to natural products and the further from processed ones, the healthier your diet is going to be.

That’s probably not great news for fake burgers, but it is for fresh fruits and vegetables and for those who bring them to the public.