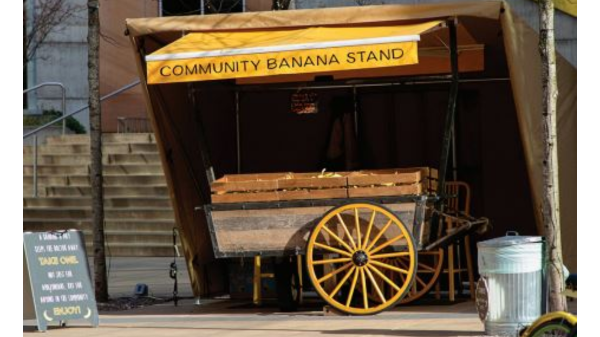 Amazon’s BB #:283186 success has been a double-edged sword for the online giant, as the company has faced scathing criticism over the years.

In its home state of Washington, a novel idea was reportedly dreamt up by founder and then-CEO Jeff Bezos to curry favor with residents near its headquarters in Seattle. Unfortunately, the public service gambit backfired.

In 2015, Amazon constructed a “Community Banana Stand” on its Seattle campus to give away bananas. Anyone could visit the stand for a free banana.

The response was immediate, so much so that a second stand was opened. It was also boon for local suppliers who sold an astonishing number of bananas to Amazon—some 8,000 per day and over 1.7 million in two years—as plenty of folks were interested in a free, healthy, portable, compostable snack.

But like many good intentions, this one went awry. The stands became the area’s de facto banana suppliers, so banana sales at neighborhood markets and eateries plunged, as did orders for banana smoothies, banana muffins, and oatmeal with sliced bananas. People even had the audacity to eat their Amazon bananas at café tables, then leave the peels behind.

Instead of earning kudos or praise, Amazon was excoriated for disrupting local business and controlling the banana market. The controversial banana stands eventually closed, and there’s no word on when or if they will reopen.