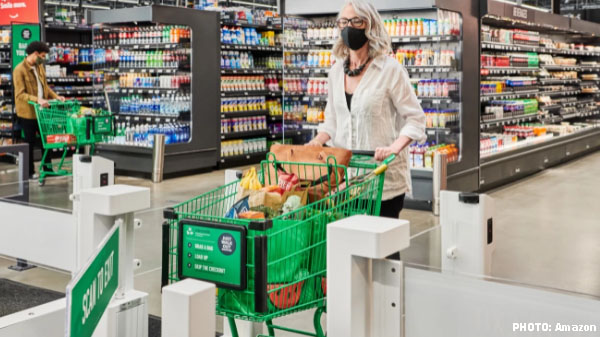 Amazon’s Just Walk Out technology is available in the retailer’s Amazon Fresh physical stores. Customers are prompted at the store’s entry gates to choose if they want to use Just Walk Out shopping or the traditional checkout lanes.

Technology is driving many retailers’ strategies to position themselves for the grocery industry of the future—from cashierless to drones to driverless trucks—and Amazon BB #:283186 has been a technology-forward company from the beginning.

In the near term, he says, the company’s experience with Amazon Prime gives it a leg up on same-day or almost same-day delivery.

“That will be the race in this space,” he predicts. Amazon recently expanded its garage grocery delivery service to 5,000 markets after a limited rollout.

In its Amazon Go stores, and increasingly in Amazon Fresh and Whole Foods as well, technology is making shopping easier. The “Just Walk Out” option lets shoppers scan their phones upon entry and use a virtual cart to avoid checkout lines, while the Dash Cart identifies products put into it and charges customers.

In addition, there’s Amazon One, which was introduced at Whole Foods in April and allows customers to pay with their palm print; and Amazon Scout, the company’s electric autonomous wheeled delivery system, available in several states and expanding to new markets.

“Convenience and safety are inextricably linked in retail these days, and the pandemic has conditioned shoppers to relinquish control to have both,” says Carol Spieckerman, president of Spieckerman Retail in Bentonville, AR. “As a digital-forward company, Amazon has benefitted mightily from this shift.”

Noting that Amazon debuted the Just Walk Out technology only four years after its acquisition of Whole Foods, she adds, “Contactless shopping exemplifies the intersection of convenience and safety, and pandemic-driven shifts between these needs benefit Amazon.”