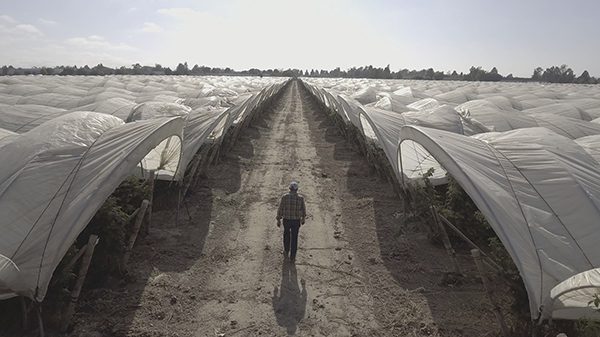 The documentary is now available for viewing by visiting www.vimeo.com/thelastharvest/film. This free screening will be limited through the end of 2021.

WATSONVILLE, Calif.–The award-winning documentary, “The Last Harvest,” releases for free exclusively on Vimeo for a timely Thanksgiving message of appreciation and acknowledgment of the challenges facing those who grow and harvest our food. The documentary is now available for viewing by visiting www.vimeo.com/thelastharvest/film. This free screening will be limited through the end of 2021.

Produced in 2019 and released at local film-festivals, “The Last Harvest” offers a rare glimpse into the hopes, hardships, and uncertain futures of three family growers and the lives of those harvesting food in the 21st century. As the consumer demand for better-tasting, natural and sustainable food increases, we don’t often consider the challenges of those responsible for growing this food. Learn how immigration reform, an improved guest worker program, and innovation and collaboration can provide solutions. Essential workers continue to play a critical role throughout the COVID-19 pandemic, and the documentary raises awareness of the challenges and contributions to feeding America.

Soren Bjorn, Driscoll’s BB #:116044 president of the Americas and a strategic advisor to the documentary, believes, “Driscoll’s will always be an advocate for immigrants and the farmworker community. They play a critical role in our nation’s most basic ability to feed ourselves. Let’s honor the hard work to feed America, keep our economy booming and meet the marketplace demand for healthy and delicious food.”

“For Americans’ food to continue to be grown in America, immigration reform is essential,” says Ali Noorani, president and chief executive officer of the National Immigration Forum, a non-partisan advocacy organization. “It is past time for Congress to act on solutions that benefit American farmers and families by offering farmworkers the opportunity to earn legal status and eventual citizenship, as well as reform the H-2A agricultural visa program.”

“The Last Harvest” made its world premiere at the 2019 Santa Barbara International Film Festival and later appeared in more than 30 film festivals around the U.S., including local screenings and several private screenings for policy makers. The film has numerous awards from festivals like the Los Angeles Film Awards, the Social Justice Film Festival, and the San Diego Latino Film Festival. While Driscoll’s funded the documentary with the goal of showcasing authentic stories from their network of independent growers, creative freedom around the topic was given to Farm League, the film’s producers. Working together, they uncovered the issues contributing to the labor shortage and explored possible solutions to those challenges. Among those featured in the documentary is J. Miles Reiter, fourth-generation grower and son of one of Driscoll’s founders.

Viewers interested in supporting immigration reform can take action via the National Immigration Forum — urging Congress to provide a pathway to legalization for undocumented farmworkers and enhance the H-2A guestworker program.

An expanded distribution strategy for 2022 will include premiere releases on platforms like iTunes, Google Play and more. In addition, a series of discussion panels lead by Food Tank, a Think Tank for food, will bring together thought leaders seeking to create broader industry collaboration and support to meet the challenges facing the agricultural industry today.

Driscoll’s is the global market leader of fresh strawberries, blueberries, raspberries and blackberries. With more than 100 years of farming heritage, Driscoll’s is a pioneer of berry flavor innovation and the trusted consumer brand of Only the Finest Berries™. With more than 900 independent growers around the world, Driscoll’s develops exclusive patented berry varieties using only traditional breeding methods that focus on growing great tasting berries. A dedicated team of agronomists, breeders, sensory analysts, plant pathologists and entomologists help grow baby seedlings that are then grown on local family farms.

About The National Immigration Forum

Founded in 1982, the National Immigration Forum advocates for the value of immigrants and immigration to our nation. In service to this mission, the Forum promotes responsible federal immigration policies, addressing today’s economic and national security needs while honoring the ideals of our Founding Fathers, who created America as a land of opportunity.

For nearly 40 years, the Forum has worked to advance sound federal immigration solutions through its policy expertise, communications outreach and coalition building work, which forges powerful alliances of diverse constituencies across the country to build consensus on the important role of immigrants in America.