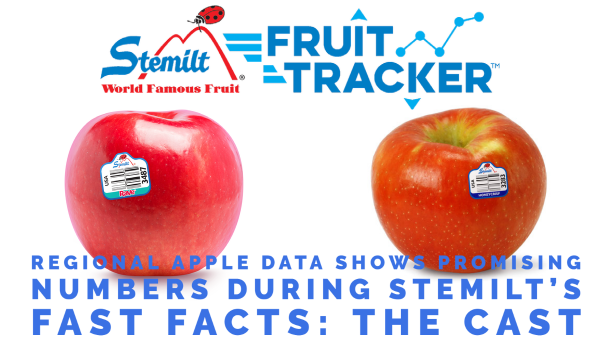 “The last twelve weeks of data had some very telling nuggets of data,” states Shales. “The top five apple varieties – Gala, Honeycrisp, Fuji, Granny Smith and Red Delicious – saw the most movement by volume and made up 77 percent of apple pounds sold from August through October. As we all could have guessed, Honeycrisp continues to be a dollar driver for the category, making up nearly 30.5 percent of apple sales in the U.S.”

Apple dollars increased eight percent year-over-year while volumes were down four percent. October is always a key month for apple sales, and followed last year’s trend of making up more than 6 percent of produce sales. This shows that consumers responded well to National Apple Month promotions and apples being positioned prominently in the produce department.

“Retailers did a great job during the month of October displaying apples and encouraging purchases,” explains Shales. “They also did a great job with branded varieties, including Rave and SweeTango apples. We saw great activity on both varieties, which makes us super excited for their potential next year.”

Shales says that due to greater volumes of Rave this year versus last, sales and volume were up significantly. The unique timing of Rave provides retailers a nice velocity spike in mid to late August and early September when other apple varieties are still coming off the trees. SweeTango also performed well, making up 24 percent of club apple volumes between September and October. It was the number two club apple by sales and 11th apple nationally.

“Both Rave and SweeTango offer early opportunities to the retailer to boost the category with premium varieties,” says Shales. “They set the bar high while still driving the category forward which helps create more brand awareness, but also helps the category as a whole succeed.”

Shales also analyzed regional data and highlighted some notable points, including how Honeycrisp made up 41 percent of sales apple sales in the Midwest, which was 10 percent more than the national average. Bags are down compared to last year due to the crop, but did see more demand in the West, which is traditionally not a bag market.

“Analyzing and looking at each region is interesting as it gives us a lot of insight into purchasing habits and can help retailers figure out what’s working and what improvements can be made the following year,” states Shales. “One nugget I found interesting was organic apple volumes were up 10 percent from last year in the south region and nearly 18 percent of apple category dollars. This is an exciting insight that will hopefully continue to grow in the years to come.”

To continue the exciting category patterns into the holiday season, Shales suggested that retailers should focus on opportunities within the crop for promotion by building plans around Cosmic Crisp to match its increased volume, taking advantage of the phenomenal Pink Lady crop, and focusing on new vehicles to sell premium items like organic Honeycrisp, which can help retailers earn extra dollars with the category.

“While this isn’t the biggest Washington apple crop we’ve ever seen, fruit quality and flavor is excellent and retailers have plenty of opportunities to make the most of it with the right plans, promotions, prices and our World Famous apples,” states Shales.

Stemilt is a family-owned grower, packer, and shipper of tree fruit. Owned and operated by the Mathison family, Stemilt’s mission is to cultivate people and delight consumers with its World Famous Fruits. Stemilt is a leader in sweet cherries and organic tree fruits, and a key supplier of apples and pears. The company stewards an environmentally sustainable and socially responsible business through its Responsible Choice program, which has been in place since 1989. For more information about Stemilt, visit www.stemilt.com.