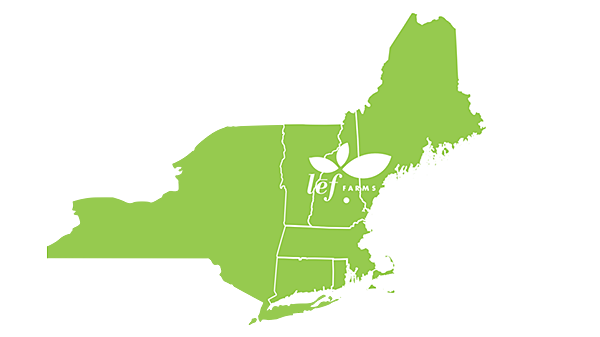 I had a chance to catch up with Abby Prior of BrightFarms and DJ Grandmaison of lef Farms to talk about what the companies have planned now that BrightFarms has acquired the Loudon, NH-based grower.

Watch here, or read the transcript below.

PamelaR: I have another exciting interview here. I have DJ here from lef farms and Abby Pryor from BrightFarms. And they’ve got some exciting news. So why don’t you tell me what’s going on with BrightFarms and lef farms. I’ve been to lef farms…by the way… I got to visit there right before they first opened. And it was a really cool experience to see fully automated awesomeness. So tell me what’s going on with you guys?

Abby Prior: Yeah, sure, DJ, I’ll start. Just last summer, and it was a busy summer, there was a lot going on. And so it may have fallen through the through the radar for some, but BrightFarms acquired lef farms in August. And we did so because we saw that lef had done something really special. They had built a really nice brand, with really unique products in New England. And they were working with the best retailers in the market. And we were also looking to enter New England and we thought, hey, this seems like a really interesting partnership, because lef was operating just one farm. And it’s really hard in this business to just operate one farm, with the amount of retailer support and, just general stuff that you need to get done on the agriculture side, really hard to do that with just one farm. So we said, hey, could we as BrightFarms join with lef and give them the support and the resources that we have now that we’ve now put together operating five farms in other parts of the country, and use that to really help their business grow, and to put some of that investment back into the customers that have made lef so successful over the last five years? In conversations with lef, that seemed like a really good idea to their team, as well. And so, the lef team joined the BrightFarms team. And now we work really closely together. And I think it’s been a really great start. And I think both organizations are really pleased with where we’re headed.

PR: DJ, we had a fun drive around New Hampshire and I think into Vermont, just a little bit to look at where you had gotten the product onto shelves to start with. How did you expand that presence? And where do you see you guys going in the future?

DJ Grandmaison: When you visited, I think we’re only in four stores. It was right at the beginning. And what we were really trying to do was establish ourselves as a key brand and a key producer of baby greens in the Northeast. And over the years, we were able to develop some really key strategic relationships with with key with key retailers in the Northeast. And what’s exciting about BrightFarms, the partnership BrightFarms is we were at a point at least, where we’re really trying to decide what is our next step, you know, where are we going next. And the BrightFarms. partnership really allows us to take that next step into the future, and gives us those resources Abby had said to really execute on a high level and continue to build our presence. The retailers that we’ve been in, we’ve been selling really well we’ve been sold out. And so the the next step is really to expand them to give us more space to grow more product, and to fill more stores in offer more products–product availability, if you will, and different SKUs, we might be growing different varieties and blends as well. So the next step is very, very exciting.

PR: Abby you mentioned that BrightFarms had targeted the Northeast, where is your closest farm lef and you mentioned expanding, DJ, what kind of expansion are we looking at?

AP: So our closest farm to the New Hampshire farm is in Pennsylvania. And so we were shipping in from our farm in Pennsylvania, you know, up into the lower the lower half of the Northeast, I would say, we’d really like to keep our produce within about four hours of our farms. That’s what feels comfortable. And so we couldn’t quite make it up as far north as we wanted to go from our Pennsylvania farm. So this new New Hampshire location was perfect. And it was ready to expand. So I’ll let I’ll let DJ talk about that.

DJ: The real exciting part about the partnership with bright Farms is, as Abby keeps saying, there’s lots of good resources is that we’re going to be expanding up to three times the size we’re at now. So we’ll be at three acres, and about a year or so. And up to 12 acres and then a couple years after that. And so there’s huge potential for lef to be producing greens for our retail partners throughout the Northeast. And really our mission is to be the No. 1, retail partner, and provide the best greens in the market. And so our expansion will allow us to broaden our product offering and increase our availability, which has been one of the struggles we’ve had. Our product is is amazing. coming out of leaf, the blends are incredible. And the demand for it outpaces what we can grow. So this expansion just solves a lot of short term problems that we’ve been having, and provides a lot of solutions now and into the future as well. So, very exciting.

PR: Let’s talk about a little bit about branding. I know lef farms has built its own brand, BrightFarms has its own brand. Where are we going to go with what the product naming will be? And and who will own the branding?

AP: Yeah, I mean, the great part is, and one of the parts of partnering with lef that was so exciting is that they already had such great retail partnerships, you know, with Ahold with Albertsons, with Whole Foods with Market Basket. And so our plan is to just really work with those customers to develop the best strategy that works for them. Strong belief that there is a consumer in New England right now that is very connected to the lef brand. We’re here to please consumers, right. That’s our that’s our whole goal. So we have no plans to migrate the brands, we have no plans to make a change, because we have consumers and Hannaford and Shaw’s and Market Basket and Whole Foods, who really love the lef brand and want to just see more of it. And so that’s what we’ve really done is we’ve worked with those customers to say, Great, let’s prioritize, let’s make sure that you get the supply that you need that will continue to to grow in the market with investment. And our plan is to potentially someday have both brands in the market. But today New England is lef farms.

PR: Okay, excellent. And as someone who has tried these greens, the DJ is bragging about? Nobody has come close with that spicy green to that amazing sandwich that one time that I had in France. Will  BrightFarms be adopting any of their blends that they’re putting together? Do you guys see any expansion of that type into the other great farms facilities?

AP: Absolutely. We don’t see a hard line in between the brands, right. In fact, DJ his role now supports the farm in New Hampshire and also our farm in Pennsylvania. And because we are we are great people trying to do great things with great produce, and that and we don’t put any hard lines between any of that. So we think we will take the best of both brands, and you may see them in either brands as we move forward.

PR: Is there anything I didn’t ask that you wanted to mention? While I’ve still got you?

AP: You know, I think I’m generally we are just really excited about the opportunity to speak together like this, you know, we were five or six months into this into this partnership and working together. So we appreciate you checking in us checking back in on us very much. And we I think would love the opportunity to come back and talk to you in 12 months or so or now when I would I’ve given DJ a heck of a lot more farm to work with. And see how he’s doing. He did an amazing job developing the entire New England market.

PR: Yeah, and I mean, I remember seeing it and I actually brought my big kid to see it back in the day hope there was no snow, which was really disappointing for January New Hampshire for a kid who had never seen it before. But I remember it just being one little acre in there and there was so much potential in the area. So I’ll have to bring the boys and have a have a look around to see how it’s grown. I’ve got it a little brother who would love to see it too, of course.

PR: Thanks, guys. I really appreciate it. Best of luck.