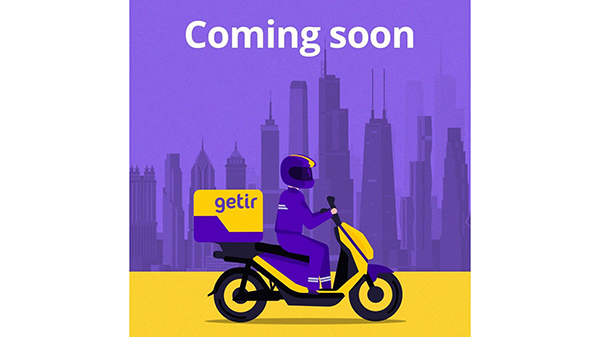 ISTANBUL, Nov. 11, 2021 /PRNewswire/ — Getir, the pioneer of ultrafast grocery delivery, today announces it has started operations in Chicago for the first time, debuting its ultrafast grocery delivery services to the United States. Further expanding its U.S. presence, Getir plans to roll out its services to the New York and Boston metropolitan regions by the end of 2021. The company revolutionized last-mile delivery with its 10-minute grocery delivery proposition that offers approximately 2.000 everyday items from chocolate to water, dairy to cleaning materials, crisps to pet food to its customers in minutes.

Getir was founded in 2015 as the world’s first ultrafast grocery delivery service in Istanbul and has grown rapidly in recent years. Following successful international launches across Europe, with the company’s launch in the United States, Getir is now operational in nine countries worldwide, paving the way for further global expansion of the ultrafast grocery delivery category. Getir’s delivery model and emphasis on prompt service helps customers save time on errands so they concentrate more on the things that matter most to them. This year alone, Getir has raised over $1.1 billion in funding, valuing the company at $7.7 billion.

Getir is known for establishing strong relationships with its people and is committed to offering its employees exemplary working conditions, including full-time positions, benefits, and employee status to drivers and packers. With safety as the top priority, drivers are fully insured and provided with e-bikes and e-mopeds, as well as helmets and protective equipment of the highest quality. Additionally, drivers receive comprehensive training and safety courses.

“Our expansion into the United States is well-timed; we’ve been perfecting our approach in ultrafast delivery since we created the model 6 years ago. Now that we’re established and thriving in Europe, it’s an optimal time for us to move further afield and introduce ourselves to the US market. We’re excited to showcase our best-in-class service to new customers and firmly establish ourselves as the true innovators and pioneers of this bustling sector,” says Nazim Salur, Founder of Getir. “I’m proud to initiate Getir’s launch in this wonderful city, and to continue providing convenience to our customers all while generating meaningful jobs in the local community.”

As an exclusive offer for the launch; customers will not be charged a delivery fee for their first five orders. The initial Chicago coverage area ranges from Rogers Park to Chinatown, and from the lakefront to Logan Square, with plans of further expansion throughout Chicago.

Getir is the ultrafast delivery pioneer. The tech company, based in Istanbul, has revolutionized last-mile delivery with its 10-minute grocery delivery proposition offering a selection of 1,500 everyday items to its customers in minutes, 7 days a week, day and night. Getir is now operating in 47 cities in Turkey and has launched operations in the UK in January, in the Netherlands in May, Germany and France in June, Spain and Italy in September, Portugal in October and the United States in November 2021.

Getir is, first and foremost, a technology company that operates in retail and logistics. It was founded in 2015 by Nazim Salur (founder of BiTaksi, Turkey’s leading taxi app), Serkan Borancili (founder of GittiGidiyor which was acquired by eBay in 2011) and Tuncay Tutek (ex-PepsiCo and P&G executive in Europe & the Middle East).