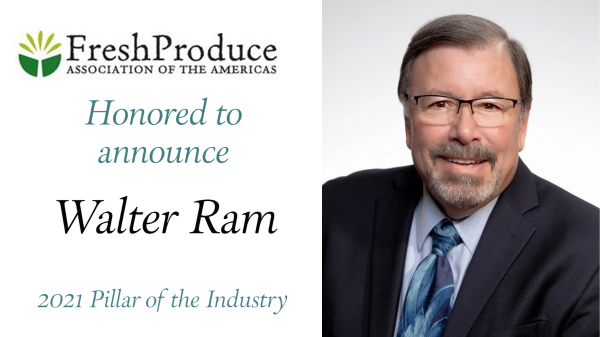 The FPAA selects Walter Ram of Giumarra Companies as recipient of the award for his many contributions and dedication to the fresh produce industry.

NOGALES, Az. – The Fresh Produce Association of the Americas (FPAA) BB #:144354 Pillar of the Industry recognition award highlights accomplishments for a member who has exhibited a history of volunteering time, effort, and impactful contributions to support the association and the fresh produce industry.

This year, the FPAA is honored to announce Walter Ram, Vice President of Food Safety at Giumarra Companies, BB #:106327 as the 2021 recipient.

With over 25 years of experience, Ram is considered a food safety expert among his peers. In addition to his role at The Giumarra Companies, Ram has dedicated countless hours working with various government agencies to develop food related plans and guidelines for the entire produce industry.

Throughout his career, Ram has been active with many groups including the United Fresh Produce Association’s Food Safety and Technology Council, the Center for Produce Safety Technical Committee, and the CPMA Food Safety Committee.

Ram’s active role at the FPAA, where he currently sits as a member of the executive committee, has been instrumental in the betterment of the industry. Ram has been actively participating with the association for over 20 years and was previously awarded the Member of the Year Award in 2014. Additional recognitions for Ram include The Packer’s 2012 Importer of the Year and United Fresh 2013 Technical Award.

“This year’s Pillar of the FPAA has held up not only his own company, but countless other FPAA members who have called him for help and technical advice, oftentimes in the middle of a crisis,” said Lance Jungmeyer, President of the FPAA.

“Walter has advised Commissioners of FDA, CEOs and entire produce industry commissions. I can’t tell you how many people who have told me how fortunate they have felt when Walter picked up their call.”

This was the day before the spinach-related E. coli outbreak that forever changed how the produce industry operates. The industry rallied to set new norms in food safety that continue to drive public policy today.

In 2008, a Salmonella saintpaul outbreak was identified as being caused by tomatoes, which led FDA to recommend that consumers stop buying fresh tomatoes. Immediately, Ram joined an industry group that worked with FDA to find the source of the problem, later identified as peppers.

“Doing what Walter does requires boldness,” Jungmeyer added. “Making systemwide changes is neither easy nor popular. But sometimes it’s necessary.”

These are but a few of Ram’s contributions to the produce industry. For his many contributions and dedication to the industry, the FPAA congratulates Walter Ram on this achievement.

About the Fresh Produce Association of Americas:

Founded in 1944 in Nogales, Arizona, the Fresh Produce Association of the Americas has grown to become one of the most influential agricultural groups in the United States. Today, the FPAA provides a powerful voice for improvement and sustainability by serving the needs of more than 100 North American companies involved in the growth, harvest, marketing, import, and distribution of produce.