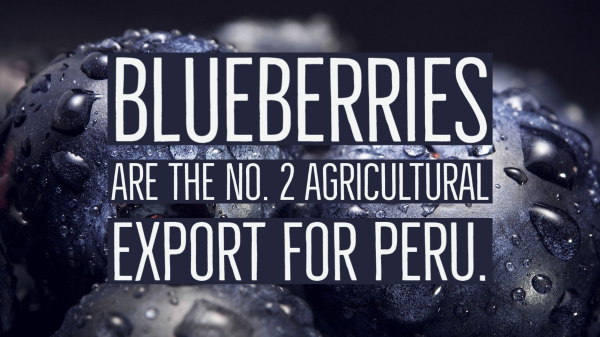 According to Agraria, Peruvian blueberry shipments reached 112,078 tons by the beginning of October, reflecting an increase of 59 percent compared to the same time last year (70,399 tons), as reported by Blueberry Consulting.

Chile, which until three years ago was the world leader in blueberry exports, is projected to reach a volume of 117,000 tons for this season, based on estimates provided by the Chilean Blueberry Committee.

The La Libertad and Lambayeque production regions contributed to the higher export performance with increases in volume of 35 percent and 151 percent, respectively, with a joint participation of 77 percent of the blueberry exports thus far.

The US remains as the main destination market with a 55 percent share, growing from 34,525 tons to 61,090 tons in volume. In the European market, excluding the UK, there has been a 32 percent growth. And in China, which represents great potential, there was an 86 percent growth.

India, a market recently opened by joint work between the public and private sectors and the National Agrarian Health Service of Peru (SENSA) has imported 6.5 tons this season.