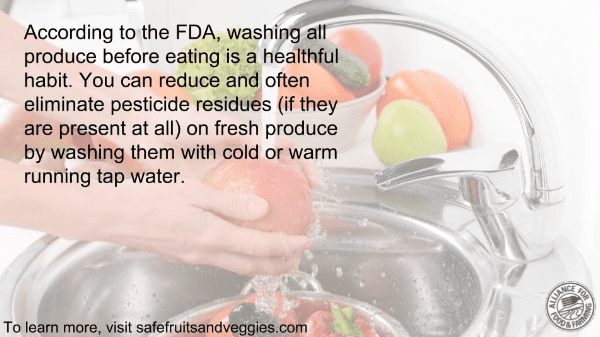 The Alliance for Food and Farming gives this advice for washing off pesticide residue.

On Thursday the 21st, the Food and Drug Administration (FDA) released the report for its Pesticide Residue Monitoring Program for fiscal 2019, which runs October 1, 2018-September 30, 2019.

A summary of the report can be found here:  https://www.fda.gov/food/pesticides/pesticide-residue-monitoring-report-and-data-fy-2019.

“FDA found that 98.7% of domestic and 89.1% of import foods were compliant with federal standards,” the study concluded. “No pesticide chemical residues were found in 42.4% of the domestic and 49.4% of the import samples.”

Let’s go further into the data for fruits and vegetables.

For domestic fruits, of 389 samples tested, only one (0.3 percent) contained “violative residues,” meaning that 99.7 percent were within safety guidelines. No residues at all were found in 12.6 percent of samples.

For domestic vegetables, violative residues were found in 2.2 percent of the 506 samples tested, meaning that 97.8 percent were in compliance. No residues at all were detected in 41.9 percent of the samples.

These findings suggest that the domestic industry is largely able to produce and deliver fruits and vegetables free of harmful pesticide residues to the public.

Finding for imported produce were more ambiguous. As the table above shows, violation rates here were considerably higher.

The import commodity tested that the highest percentage of violations by far was dasheen taro, in which 77.8 percent of samples were in violation. Imports of this vegetable come largely from Mexico and Latin America, to judge by this report: https://www.seair.co.in/us-import/product-dasheen.aspx.

FDA uses this data to determine the numbers of samples it will test in future years. It will request more samples for import commodities whose violation levels approached 10 percent in this study. Consequently, it is requesting an increase in samples for lettuce (9.7 percent), cabbage (9.5 percent of samples in violation), and lemons (8.8 percent), among other items.