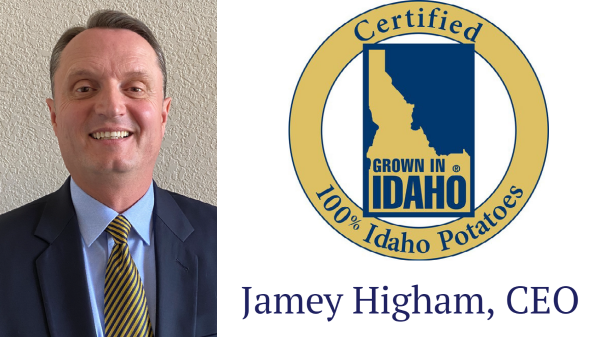 Born and raised in Idaho® potato country, Higham says he is looking forward to building on the spud’s strong global reputation for high quality.

“IPC has done a tremendous job of stewarding the brand, and I’m very humbled and excited for this opportunity,” says Higham, whose high school in Shelley, Idaho, was represented by a russet potato mascot. “I started in the potato industry in 1991, and it’s in my blood.”

Higham launched his career in quality control at Walker Produce in Idaho followed by several years in sales at Potandon Produce in Idaho Falls. He spent five years at Ford Motor Company in marketing and sales after earning a master’s degree in international business marketing at Arizona State University’s Thunderbird School of Global Management.

But the appeal of potatoes proved too strong to resist, Higham returned to Potandon Produce in 2003 for 13 years, ultimately serving as vice president of sales. In 2016, he was named president and CEO of Farm Fresh Direct, where he helped drive strong growth of the company’s conventional and organic potato lines.

“Jamey is a potato guy through and through, and he really understands the industry,” says Brett Jensen, IPC Chairman. “With his lifelong love for Idaho® potatoes, we know he’s going to do an amazing job of supporting our growers, shippers and processors around the state. We’ve got a great brand and a great story to tell about our potatoes.”

About the Idaho Potato Commission
Established in 1937, the Idaho Potato Commission (IPC) is a state agency that is responsible for promoting and protecting the famous “Grown in Idaho®” seal, a federally registered trademark that assures consumers they are purchasing genuine, top-quality Idaho® potatoes. Idaho’s growing season of warm days and cool nights, ample mountain-fed irrigation and rich volcanic soil give Idaho® potatoes their unique texture, taste and dependable performance. These ideal growing conditions are what differentiate Idaho® potatoes from potatoes grown in other states. For more information, visit www.idahopotato.com.