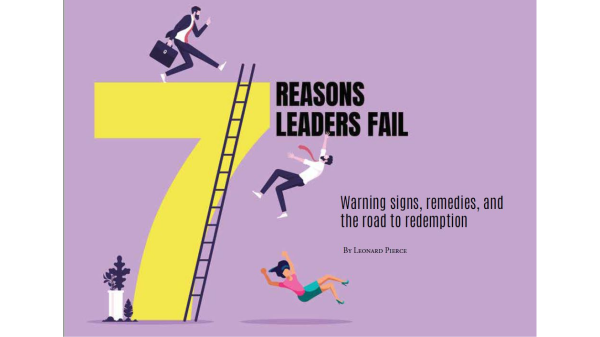 Whether you manage five people or five thousand, learning how to spot and prevent leadership mistakes can reduce trouble before it starts.

Lonely at the Top
It takes courage to lead. In the business world, as elsewhere, being in charge means taking risks, putting your reputation on the line, developing trust, and trusting others in return.

Bill George, a senior fellow at Harvard Business School and former CEO of Medtronic, wrote in Forbes about how his fear of patent and pricing risks led him to pass up the opportunity to buy another promising healthcare company; it was almost twenty years before Medtronic would recover and become a leader in the industry.

Leadership also comes with a price. Managers and CEOs are often held responsible for the failure of a company even when the blame lies elsewhere.

Poor planning, a dysfunctional corporate culture, and economic factors beyond anyone’s control can all contribute to a company facing disaster despite the leader’s best intentions, as many found out during the Covid-19 crisis.

Just as there are no set rules for why a business succeeds, there are no commands written in stone about why they fail.

As the old saying goes, success has a thousand fathers, while failure is an orphan. But by examining case studies, researching high-profile leadership failures, and speaking with consultants and industry experts, Blueprints will help identify common mistakes that often plague unsuccessful leaders.

What does it mean when we say a business leader fails?

Wendy McManus, owner and lead consultant for the firm Connect2Potential, doesn’t think the term is all that useful: “I would not frame any of my comments in terms of failure. All leaders face challenges; some do better than others in terms of meeting and overcoming those challenges. I don’t see performance in terms of those binary concepts.”

When it comes to leadership, no failure is permanent as long as they’re recognized, and leaders make an effort to change course and make improvements. If leaders try in earnest to better themselves and their leadership style, others will likely follow suit.

When managers and leaders fall prey to one of these deadly sins of leadership, remember the words of the actress Mary Pickford, who said, “This thing we call failure is not the falling down, but the staying down.”

Seven Deadly Sins
Some flaws and negative behaviors are more serious than others. We will present seven in this Blueprints series that can cause a great deal of damage to a company, its management, and associates.

This is an excerpt from a feature in the September/October 2021 issue of Produce Blueprints Magazine. Click here to read the whole issue.