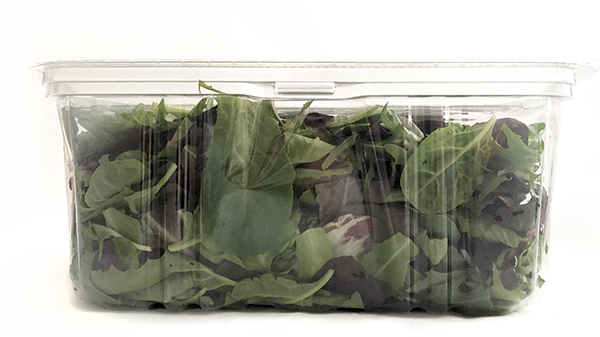 Probably no item exemplifies the dilemmas surrounding produce packaging more than the clear plastic clamshell, in which the greatest portion of berries (for example) are sold.

As we have seen, the clamshell is recyclable only in theory, because the nation does not presently have the widespread infrastructure to recycle it in practice.

But the clamshell has one feature that ensures its current popularity: visibility. A shopper can hold up a clamshell of raspberries and examine whether the ones on the bottom look as good as those on the top.

Americans love visibility, and at this point, visibility means plastic: “100-percent visibility—then it has to be plastic,” says Shannon Boase, director of new market development for CKF Inc. in Langley, BC.

This trend is changing to some degree. “We sell a lot into Europe,” says Boase. “Produce growers look to Europe for packaging trends. Customers in Europe can’t get out of plastic fast enough.”

Boase cites a case in which her company replaced a two-count plastic tray for avocados with flow wrap. “The retailer rejected it, saying it’s got to have less plastic still.” In the end, the company settled on cardboard sleeves.

Boase notes that “a certain consumer segment understands that there’s an environmental cost” to full-visibility plastic. “It’s starting to resonate with consumers.”

Nevertheless, Nick Maglio, director of marketing for ProEx Food, LLC of Milwaukee, WI, which specializes in engineering and equipment for fruit and vegetable processors, observes, “To date, there haven’t been a whole lot of requests for sustainable packaging.”

If a produce package doesn’t allow 100-percent visibility, Boase points out, branding becomes more important: consumers have to trust that the company will deliver the quality they expect, whether they can see the product or not.

Boase’s CKF Inc. focuses on molded paper pulp products. One new product consists of a molded paper punnet (the little basket containing the product) with a top-seal lid, “removing 98 percent of the plastic in the total product” while still providing some visibility.

She says some cherry growers in the Wenatchee-Yakima, WA area are using this concept for 1- and 2-pound containers of pitted cherries.

Another variant is the top-seal clamshell: “The bottom is a clamshell, but the top is a film that protects fruit and maintains quality but uses 30-percent less plastic on average than a standard clamshell.”

This is an excerpt from the Applied Technology feature in the September/October 2021 issue of Produce Blueprints Magazine. Click here to read the whole issue.