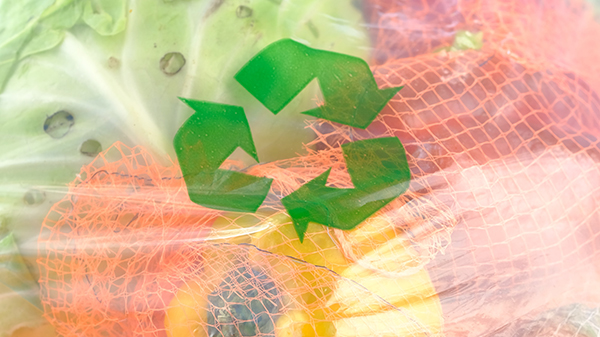 Shannon Boase, director of new market development for CKF Inc. in Langley, BC, explains the difference between recyclable and “widely recyclable” material. She points to a recycling certification program, called How2Recycle, organized and managed by the Sustainable Packaging Coalition.

“A lot of grocery retailers are involved,” says Boase, adding that it’s a “great idea, bringing consistency to what is considered recyclable. ‘Widely recyclable’ means that (1) recycling infrastructure in North America can accept the material, and (2) there are ready end-markets for it.

“It’s not widely reported,” Boase continues, but “in the United States PET 1 plastic is not considered widely recyclable. The recycling infrastructure is broken,” she contends.

Most PET is not widely recycled, unless it’s in bottles.

“Today,” Boase continues, “9 to 12 percent of plastic is recycled—practically all bottles. Clamshells are not recycled.”

In other words, finding a triangle on the bottom of a packaging item with a number in the middle tells very little about whether it will actually be recycled.

“We’d like to see the government improve the waste management system,” says Jessica Hughes, director of innovation for EarthFresh Farms Inc., based in Burlington, ON.

“Currently, there is not a consistent disposal system; it varies from municipality to municipality,” Hughes notes. “If we have a compostable plastic, how do we know it won’t be removed when it arrives at the composting facility as plastic waste?”

“One thing that’s very important is defining terms so you don’t greenwash,” says Steve Greenfield, director of sales and marketing for NNZ Inc., an international company that makes packaging for the produce industry.

“Many people throw out the term ‘biodegradable,’ but this is really meaningless, as everything biodegrades.” What counts, he adds, “is the length of time it takes to biodegrade. So compostable is a more defined term, but then you have to indicate whether it’s industrially or backyard compostable.”

This is an excerpt from the Applied Technology feature in the September/October 2021 issue of Produce Blueprints Magazine. Click here to read the whole issue.