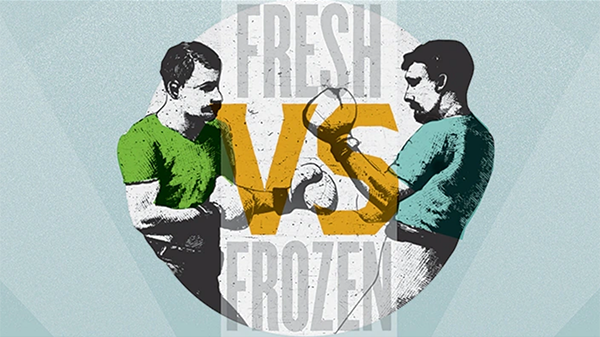 “Frozen is the David to fresh’s Goliath”.

Or: “Demand for fresh food shows no signs of cooling, but consumers are examining out more Frozen Alternatives”.

These two headlines refer to the same story: a report released by accounting giant Deloitte on consumers’ perceptions of fresh versus frozen food.

Despite variations in nuance, these headlines are all reasonably accurate.

This quotation probably best sums up the essence of the Deloitte study: “While fresh is beloved and will likely continue [to] occupy a larger share of the consumer’s plate, the challenge from frozen is undeniable. The perishable nature of fresh food is now harder for many consumers to integrate into their lives.”

Frozen food enjoys a great advantage over fresh in the single most important factor in the consumer’s mind: price.

“Price is still king—nine in 10 consumers report that price is again the most important purchase driver for fresh.” As the report goes on to say, “Fresh food can be significantly more expensive at baseline than its frozen equivalent.”

These figures were much lower for older shoppers, only 39 percent of whom agreed that frozen vegetables were at least as good as fresh; the percentage of older shoppers feeling this way about frozen berries was 23 percent.

The pandemic is another factor, having reduced frequency of shopping trips.

“It appears that new shopping habits are enduring even as consumers feel less stressed about shopping in stores,” says the report. Fewer and more infrequent shopping trips create a perceived disadvantage for fresh products, which are more likely to spoil.

The pandemic is not over, and at present it is impossible to determine how many of the trends it fostered will continue into more ordinary times. But one issue that will not go away is perhaps the most significant one: waste. And that does not favor the fresh option.

According to the Deloitte survey, 72 percent of shoppers agree with the statement, “I typically think about food waste and how much I throw away when making a purchase decision.”

More alarmingly, 60 percent of those surveyed agreed with the statement, “Fresh food’s shelf life (time between buying and spoiling) has decreased recently.”

Another 45 percent agreed with the statement, “More of the fresh food in my home is going to waste than it did in the past.”

The fresh option is, of course, far from doomed, if only because fresh produce is more appealing than its frozen counterpart. It is much more enjoyable (and tempting) to stroll through the typical produce section than to march down an aisle of freezer cases.

Furthermore, as the report notes, “Eating fresh is an identity and lifestyle that don’t appear to translate to or have the same cachet in frozen.”

All in all, the study suggests that food waste is the weak point in the fresh versus frozen dichotomy. And food waste, being part of a larger concern about sustainability, is not going to vanish as an issue in the foreseeable future.

This leads me to think that the best option for the fresh produce industry is not to create a sense of competition with the frozen category (each sector has decided advantages that it is not going to lose).

Instead, it would be to create an industrywide campaign to deal with post-purchase waste: suggesting clear and simple ways of reducing the amount of fruit and vegetables you, the consumer, eventually throw into the garbage.

Maybe this strategy sounds self-defeating: what if the best way of fighting produce waste is to buy less at any given time? But it is less self-defeating if viewed in a bigger context.

A consumer buys four apples, eats two, and throws two away. That consumer is, I would imagine, less likely to buy apples on their next shopping trip than one who only bought two apples and ate both with enjoyment.