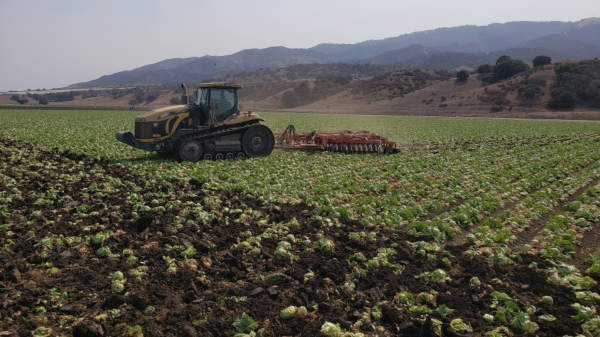 This field of iceberg lettuce had to be disked due to virus and pathogen problems. (all photos courtesy of Markon).

It’s been nearly two months since our previous update on soil and crop health in the Salinas Valley.

Although yield losses are nowhere near what we experienced a year ago, there has been a noticeable increase in some of the invasive pathogens and plant viruses which caused a significant amount of acres to be plowed under last year.

The main culprit last year was Impatiens Necrotic Spot Virus (INSV), which was not a new virus in the Salinas Valley, but it had never become so widespread and devastating as we saw last year. INSV has been seen sporadically and in low percentages through this 2021 Salinas season, but is now starting to flare up.

Over the past two months, other pathogens such as Sclerotinia, Fusarium Wilt, Pythium Wilt, and Verticillium Wilt have been more prevalent and have led to more significant die-off and lost acreage. If these viruses and pathogens continue to spread, we could be faced with a supply shortage before we make the transition to the desert growing regions of Arizona and California.