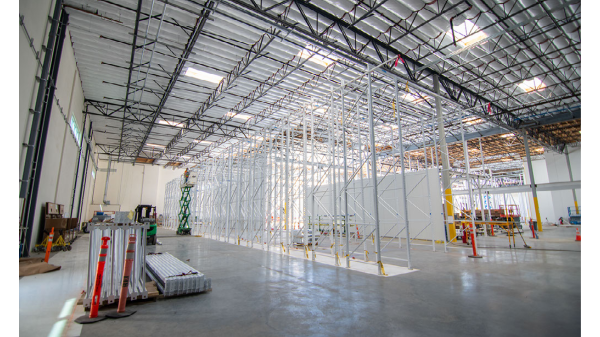 Inside Plenty’s Compton, CA, building, which when completed, will be the world’s highest-output, vertical, indoor farm. (Courtesy Plenty)

?With all the investment in vertical farms and controlled environment agriculture (CEA), we’re not far from seeing an explosion of products from these growers in the market.

Plenty Inc. BB #:356949, South San Francisco, is one of those companies that are months away from a huge volume boost when its vertical indoor farm in Compton, CA, starts producing commercial quantities of leafy greens next year. It calls the facility the world’s highest-output vertical farm.

“At Plenty, we’ve done the investment, and now it’s time to transform it into a commercial business,” said Dana Worth, senior vice president, commercial, for Plenty, Sept. 10.

“It’s an exciting time, going from an out-there idea to something more mainstream,” he said.

Plenty currently operates a farm in South San Francisco, and last spring signed a deal to supply more than 50 Safeway stores in Northern California with salads, such as baby arugula and baby kale.

Worth said the vertical farm segment addresses the problems with climate pressure and suitable land for salad products.

“We’re tapped out of land in these Mediterranean climates,” he said. “There are different approaches for CEA, and greenhouses have been around for decades. We feel our technology allows us to deliver to these needs on a global scale.”

Earlier this summer, Mike Zelkind, CEO of vertical farming company 80 Acres, said with so many CEA companies coming into the market, there will be winners and losers in the segment.

Worth said Plenty doesn’t think of it that way, considering that consumer demand keeps growing for safe, healthy salad products.

“Consumers eat less than half of the produce they should,” he said. “We feel like there’s lots of space to expand the market around fresh. We don’t feel like this will replace field production.”

In addition to anticipating the Compton farm’s production, Plenty has been investing in company leadership with three recent hires and a grow director this week.

“We are a tech company at heart, and we’re unmatched in the industry,” Worth said. “There are a lot of benefits for consumers and that’s why we’re making this large investment.”