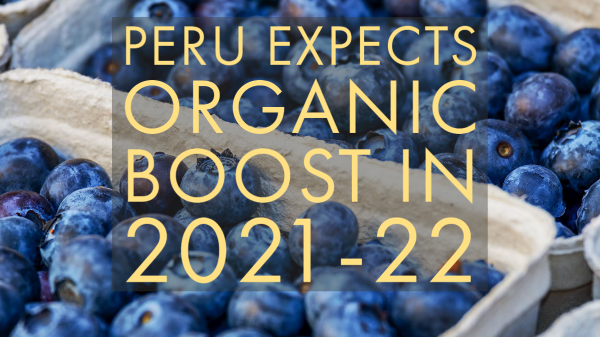 Peru plans to export 211,200 tons of fresh blueberries during the 2021-2022 season, representing an increase of 30 percent compared to the 162,459 tons shipped the previous season, Daniel Bustamante Canny, the president of the Association of Blueberry Producers from Peru (Proarandanos) told Agraria.

Bustamante said the Peruvian blueberry industry is relatively young, with shipments beginning in the 2015-2016 campaign exporting 12,951 tons. Six seasons later it has already grown more than 12 times, making Peru the main global supplier of this fruit.

“There are high expectations for organic blueberries because there is a very strong trend in the world to eat healthy and natural products,” he said. “We expect that in the next 5 years organic blueberry exports will grow at the same rate as the blueberry industry, that is, between 10% and 15% of total production would be organic.”

The U.S. will continue to be the main destination during the 2021-2022 season, receiving 50.7 percent of the total exported. However, it will represent a lower participation compared to the previous season when it accounted for 52.9 percent (86,379 tons).

“This increase in shipments to China is due to the new varieties of blueberries that have been planted in our country that attract attention in that market, which resist longer trips and have a longer postharvest life,” Bustamante said.

In this regard, he said that Peru currently has 46 varieties of blueberries, when in 2016 there were only 13 varieties.

He said Peruvian blueberries are currently exported to 30 countries and are expected that in this season to enter India and is also negotiating through Senasa to open the markets of Japan, South Korea, Indonesia, and Vietnam, among others.