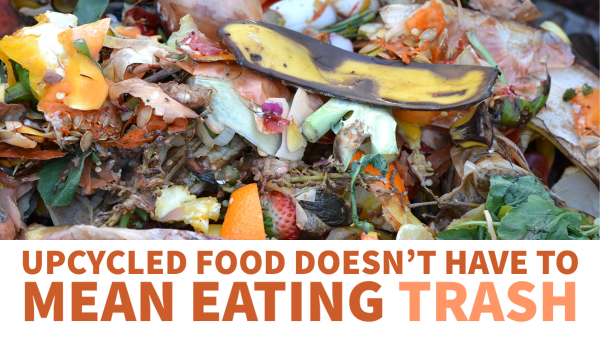 The concept of “upcycled food” creates cognitive dissonance for me.

On one hand, I abhor waste. I shop at garage sales, buy used cars, shop at thrift stores, buy scalped ballgame tickets, etc. I try to cut wasted effort in my job, and I love hearing stories of produce companies that cut out waste and tell that story to consumers.

On the other hand, when I hear of upcycled food, I often think of things like banana peel bacon, and then it takes me to the folks who say insects are the future of protein.

I love the planet but not enough to eat trash or bugs.

John the Baptist ate locusts and honey, but God instructed the rest of the Bible folks to eat plants and then animals after the flood (Genesis Chapter 9).

A PMA town hall webinar July 14 provided several views on the future of upcycled food and what it means for fresh produce.

I learned it’s difficult for anything upcycled to compete with fresh produce. It would more likely be complementary.

Jonathan Deutsch, professor and director of Drexel Food Lab, said he views upcycled food as value-added, where consumers would want to pay more for a product.

For example, if you have wilting kale, you can make kale chips from it, sell it as value-added and tell how it prevented food waste, compared to selling wilting kale fresh as a distressed item at a value price.

Deutsch said the concept was originally called VASP, value-added surplus product, but once it changed to “upcycled” it had marketing potential.

“Consumers see it as a distinct category, closer to organic,” he said.

Another presenter, Timothy Childs, founder and co-CEO of Treasure8, a technology company that turns food waste into nutritious products, said his company’s concept is to reduce the cost of nutrition.

“Nutrition is the key,” he said. “We look at it as an energy system. The energy that is dissipated and lost is waste, so we have to capture and store and repurpose.”

He said more companies are looking at energy this way, which is helpful for upcycling and reducing waste.

Deutsch said upcycling awareness is still very low, but studies show consumers are receptive to it.

“About 80 percent of consumers don’t care, so we have to reach that 20 percent with the right message,” Childs said.

Deutsch said the message can be as simple as “this food would have gone to a landfill, and it reduces waste” on packaging.

Max Teplitski, Chief Science Officer at the PMA BB #:153708, who moderated the webinar, said in a follow-up discussion that he agrees that upcycled fruits and vegetables don’t compete with fresh but rather complement.

“The produce industry, in my opinion, should absolutely highlight all of its sustainability efforts, and upcycling foods is one such example,” he said.

“The biggest challenge, in my opinion, is scaling up such operations, especially as we are dealing with a highly perishable commodity, perhaps on the tail end of its useful shelf life.”

He sees great potential in ingredients made from processing waste such as grape and olive pomace, avocado pits, vines of root crops, apricot kernels, and more.

There is great potential for upcycled food, and it doesn’t mean I’m eating trash.

“What can’t be upcycled can be returned to the soil,” to continue the natural cycle, Deutsch said.

Kind of like when growers disc under a crop when it isn’t profitable to pack and ship to market?