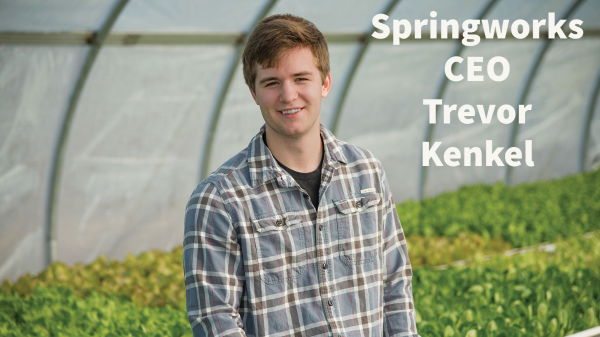 The company has announced plans to expand to 500,000 square feet of greenhouse space in coming years.

Springworks, founded in 2014 by CEO Trevor Kenkel (who was then 19), sells Greenleaf, Bibb, and Romaine lettuce to Whole Foods markets in New England and Hannafords Markets “down to New York,” according to Kenkel, as well as to local stores and restaurants. It also raises tilapia, which it sells to a fish market in Portland, Maine.

The fish, in fact, are the key to aquaponics. Water in which they are raised is then used on the lettuce, providing both micro- and macronutrients and eliminating the need for commercial fertilizer.

Kenkel points to a “dramatic reduction in water usage and land use” through this method.

The process starts with “a little bit of media that we propagate the plants on. From there it’ll go into the greenhouse,” where “it’s deep-water culture. Fish provide the nutrients—pretty much the whole gamut.”

Springworks lettuce is sold at prices matched to other organic lettuce, which, Kenkel estimates, is usually at a premium of somewhere between 15 and 30 percent over conventional.

Kenkel adds that the coronavirus has hastened a trend toward locally produced, greenhouse lettuce as an alternative to the large-scale, field-grown commercial product from California and Arizona.

“The problem associated with a centralized distribution network is that there’s less response to changes in demand,” Kenkel explains. “We’re just starting to roll around to a more regional approach,” which, he contends, fosters “a local sense of resiliency.”

According to a Springworks press release, “When the pandemic began to take hold in 2020, Whole Foods sourced Springworks to stock/shelf their loose lettuce products in order to meet the immense consumer demand for organic lettuce in the northeast. Many grocery stores experienced west coast-based supplier unreliability due to transportation delays and other cross-country supply and delivery problems.”

As Kenkel indicates, Springworks’ operation is part of a trend toward growing crops such as leafy greens in greenhouses closer to major Eastern and Midwestern population centers rather than shipping them from the large producing areas in the West.

This trend cuts against developments in the mainstream produce industry, which is continuing to see increased consolidation of suppliers.

In the short run, it is hard to imagine that leafy greens from local greenhouses will supplant the immense—and immensely efficient—industry in California and Arizona (which still account for some 95 percent of the lettuce grown nationwide).

But as Kenkel points out, the coronavirus revealed the weaknesses in a centralized supply chain. These risks are amplified by the possibility of cyberattacks such as the meat industry has recently experienced.

Conceivably lettuce could provide a counterexample to the produce industry’s increasing trend toward centralization.