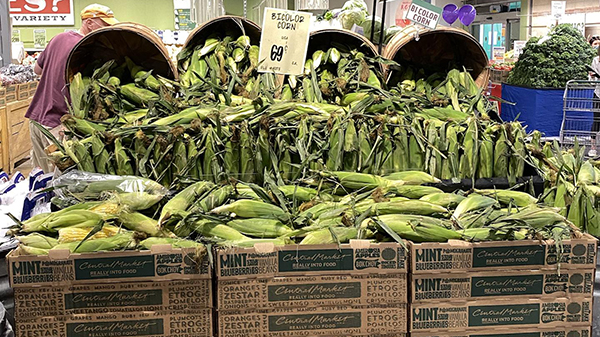 This looks like just your average sweet corn spillover. Scroll down to see what makes this amazing.

Ready for sweet corn peak season? Heavier volumes will start ramping up as the sweet corn season heats up this summer. The typical Midwest peak starts in late July, when consumers are ready to start tearing into some sweet corn displays at retail.

I came across this flippin’ sweet corn display at H-E-B’s BB #:106490 Central Market over the weekend and couldn’t resist snapping a photo.

Somebody knows their shoppers, and is keying in to one of the largest, and most unappreciated (if you ask us) segments of shoppers: Gen X

(and elder Millennial sometimes called Xennial but NEVER, EVER call us GERIATRIC Millennials)

Everything about this amuses me. For those who didn’t graduate high school in 1998, this is a play on a “metal” band Korn, which had a series of hits on MTV — back when MTV actually played music videos.

Is it right for every store? No. Is it 100% perfection for the hipster Gen Xers who shop at Central Market with their kids on a Sunday afternoon in Austin, TX? Absolutely.

And I’m not the only one who agrees. I shared the photo on several social media sites, including LinkedIn, Facebook, Twitter, and Imgur, where it went viral. Imgur might not be on your radar as it is kind of niche. It’s a photo sharing site related to Reddit.

This post hit the front page, which meant it met the right metrics of popularity and upvotes to get shown to a wider audience. In just a few days it garnered 104,000 views, 2800 up votes (23 downvotes – hmph) and more than 60 comments, many of which are accolades for San Antonio-based H-E-B.

So, my Gen X and Elder Millennial friends, enjoy the earworm of terrible 90s alternative metal for the next few days. I know I can’t get these songs out of my head.

I can’t get sweet corn out of my head, either.