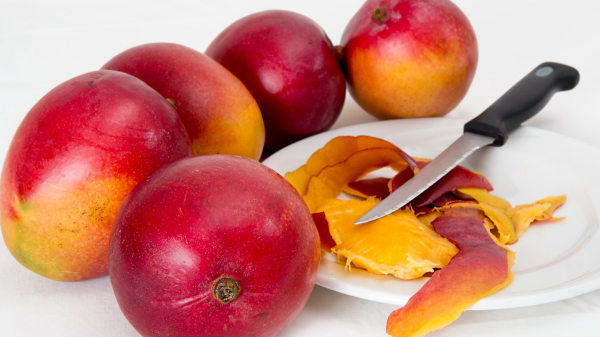 Evidently in the Philippines, there is a saying that a girl is not ready for marriage until she knows how to slice a mango.

Not being a Filipino girl of marriageable age, I did not possess this skill. I only knew that the way I was doing it was wrong.

So I resorted to that fount of all knowledge called the Internet, where a quick instructional article showed me how.

Of course, I also could have checked with my fellow Blue Book associate Pamela Riemenschneider, who recorded a handy tutorial last fall.

A few days before, I saw the mangos at Costco looked very good, so I bought a box. Now I had the chance to try out this new method.

Essentially you slice four “cheeks” of the mango off the pit, going as close to it as possible so as to get the most flesh. Then you hold the cheeks (with the peel still on), score them with a knife, and either scoop out the flesh with a spoon or turn the cheeks inside out and slice the mango cubes off the skin. You get the rest of the flesh off the pit by biting it off with your teeth.

It works! Certainly an improvement over peeling the mango and clumsily trying to hack the flesh off the pit. The flesh around the pit tends to be fibrous, though, so I was glad to have some dental floss at hand. Also, the smaller side cheeks don’t have that much flesh, so there may be no point in scoring them.

Pamela’s system is about the same with some slight changes, and she says there are many effective ways. Feel free to compare and use whichever method works best for you.

Apart from an intent to be helpful, I go through this process to make a point about the mango industry.

Much of this increase comes from an influx of populations from countries in Latin America and South Asia, where mangos are a staple. The mangos I spied at Costco were in a cart pushed by two ladies in saris.

In order to take this delicious fruit further into the mainstream, it might be helpful to let American consumers know how to slice it properly. I imagine that most of them, like me before my little lesson, don’t. After all, the most popular fruits in the U.S.—such as apples, oranges, and bananas—are known for their ease of use. (Although some say that our cousins the monkeys are better at peeling bananas than we are, preferring to squeeze them from the blossom end, which makes them open easily, rather than breaking off the stem. As this video suggests, the idea that monkeys do it this way may be a myth, but it is definitely my experience that it is easier to start from the blossom end.)

In any event, it seems that produce popularity is due in part to ease of use. As I’ve proved, it’s not hard to learn how to slice a mango, although we might be able to take the concept one step further.

The Alphonso, which originated in India, is widely said to be the king of all mangos in terms of flavor. You can get them in this country, although they’re not cheap: The ZZ Group BB #:274103 offers them for $79.99 for a box of twelve.

How about breeding a freestone Alphonso mango?

If you make a fortune by turning this idea into reality, I hope you will have the decency to send me a crate.