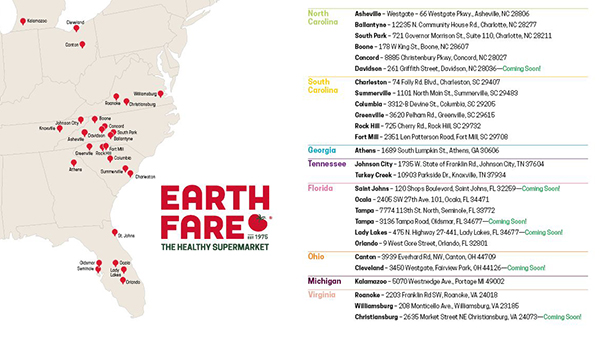 A year after the specialty retailer went bankrupt and closed, Earth Fare BB #:168468 is reemerging – faster than expected.

The Asheville, NC-based company closed all 50 stores and liquidated assets in February 2020.

A handful of locations were sold to Winn-Dixie, Aldi, and Whole Foods, before a group of investors including original Earth Fare Founder Randy Talley and former president Mike Cianciarulo launched a plan to revitalize the brand in July 2020.

The revitalization is moving faster than expected, Cianciarulo said in a company post on LinkedIn.

“Our original plan was to open eight Earth Fare locations,” he said. “However, after an overwhelming response from the public, we knew we had to do more.”

The company accelerated openings, with new stores in eight states.

“Our team quickly realized how much Earth Fare was missed and we understood the importance of bringing healthy options back to as many communities as possible,” Cianciarulo said. “To date, we have successfully reopened 21 locations across eight states…with six additional locations set to open later this year.”